This is really going the last post of my series on Oracle VM Server / VM Manager on inexpensive hardware.

Last week a second Dell Power Edge arrived, followed by a little NAS/iSCSI System, the ES-2100 from Eurostor, which is rebranded Thecus N5200 Pro. I do link Eurostor because i made some very nice contact with their tech support.

After running the Oracle VM Server on a 2.4 GHz Core 2 Duo Xeon with 4 Gb Ram for about 70 days non-stop, we decided to do the next step: Incarnating a second server with a shared storage.

The one server runs an paravirtualized OEL5 with 2 GB Ram which itself runs an Oracle 11g test instance with medium load, a hardware virtualized Windows XP with 512 MB Ram that runs a Jetty with a few services and since 2 weeks a hvm Debian that serves as a mailrelay for that Exchange of ours… Which has a now really less load as SpamAssasin takes care of all.

Setting up the second Dell was flawless, nothing new.

The iSCSI was another thing… First i deleted the RAID6 as we decided to go for RAID5. Stupid me set disk usage to 100%, went for the weekend, came back on monday and saw: Wow, no space for the iSCSI target. Damn it, all timeplans went bazoo… So deleting the RAID once again and back to start, this time with 20% for Disk Usage (you never know) and 80% for one iSCSI target (if this was my machine, i really had a purpose for 1.5TB storage… but here.. *sigh*).

So, another 8 hours later, i bought a cheap 8 port Gigabit switch, set up the ES-2100 for link aggregation and connected it to both Oracle VM Servers.

I roughly followed the steps described here, but as i changed some steps, let me describe them:

The ocfs2 cluster configuration is as simple as described in the linked Oracle document. I recommend adding names and ipaddresses corresponding to the one in /etc /ocfs2/cluster.conf to /etc /hosts, as the o2cb services won’t start otherwise. One thing Oracle forgot to mention is to open port 7777 on both machines in the iptables configuration.

At first i made the mistake to mkfs.ocfs2 the device and forgot to create a partition. This worked for whatever reason, but i destroyed the filesystem and created a partition with fdisk (new partition, primary, the whole thing).

Next, i didn’t follow Oracle but decided the following:

So in the end we have a safe setup with hardware costs under 5k € and a setup time from about 6 or 7 days which brought some good knowledge and know-how. I think we wouldn’t have achivied this based on a VMWare solution brought by external consultants. Maybe that would have ended like the last Dilbert in that series ;).

To bring some variety to this blog, here’s a picture of the current setup: 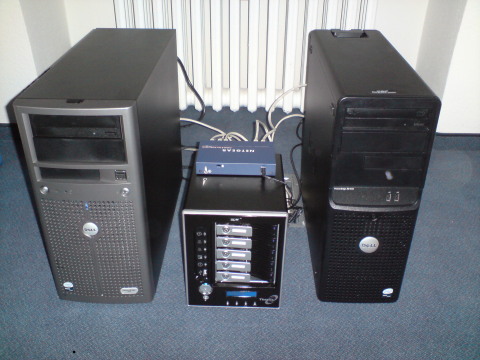 I one of the google visitors or the 2 readers have any questions, feel free to ask 🙂

This entry (permalink) was posted on February 19, 2008 at 8:28 PM by Michael, tagged with Oracle VM, Virtualization and categorized in English posts, Oracle, Virtualization.