In January 2012 i bought a 27″ iMac 12,2 with a Intel Core i5 at 2,7Ghz which should have been a pretty decent and fast machine back then. The RAM can be easily upgraded in this thing which i did already back then to 16Gb for a fraction of the price Apple wants.

The machine came with OS X 10.6 “Snow Leopard” and shortly after migrating from my MacBook (i was using a MacBook back then for everything but the external display at home was annoying) i got a little disappointed. The iMac never was as fast as expected because the built-in, Apple branded Western Digital “WD1001FALS” was and is incredible slow (and I’m not the only one who thinks so). But the iMac was usable until OS X 10.8 “Mountain Lion” came out. From that point on i was afraid of every OS update coming out because booting took already ages.

I had all the RAM inside the machine for running VMs for testing purposes but i was afraid of restarting them. The Win 7 VM needed about 30 minutes to boot and the disk noise during that time was hardly bearable.

The problem with this iMac is not only that you have to open it through the front (removing the glas panel as well as the display) but also that it’s equipped with Apple branded disk having a custom firmware that reports the temperature through the power cable. If you replace it with a standard disk, the fans go haywire as the OS assumes something wrong. You can solve this with software but that seems too unstable for me.

German Apple reseller Gravis has it’s cBreeze module for fixing that but i wasn’t sure if i can buy it stand alone. Bringing my Mac to store would have forced me to delete my system upfront (totally out of question bringing a system into a store for days containing my personal life for the last 20 years).

Other World Computing also has a module available but i hesitated ordering until last week, when i read this tweet by Dominikus and i thought: What the heck… Let’s try this.

The plan: Replace the build-in disk with a faster and bigger one, add an additional SSD to build up a Fusion Drive.

Two full backups (cloned disks) on different external drives, one Time Maschine backup and the original data on the internal disk I’m about to exchange.

I bought this MacSales kit including tools for removing the glass, all screw drivers and a flat SATA cable and the in-line thermal sensor for iMac 2011. I’ve ordered Friday night, the package arrived on Wednesday with all customs information correctly declared. Amazing.

The new HDD is a again a Western Digital, but this time a WD-RE Enterprise-class disk with 3Tb, the SSD will be a Samsung 850 Pro with 256Gb. Everything above that is too expensive for me.

I’ve opted for the enterprise grade disk and the Pro not because of their speed but for their guaranteed reads and writes. As i want to build a Fusion Drive from both disks, reliability is essential: Losing one disk means loosing all data.

The MacSales video is enough to perform the upgrade:

Thanks a lot for the great manual. Once inside, all components are reachable. It’s really easy: 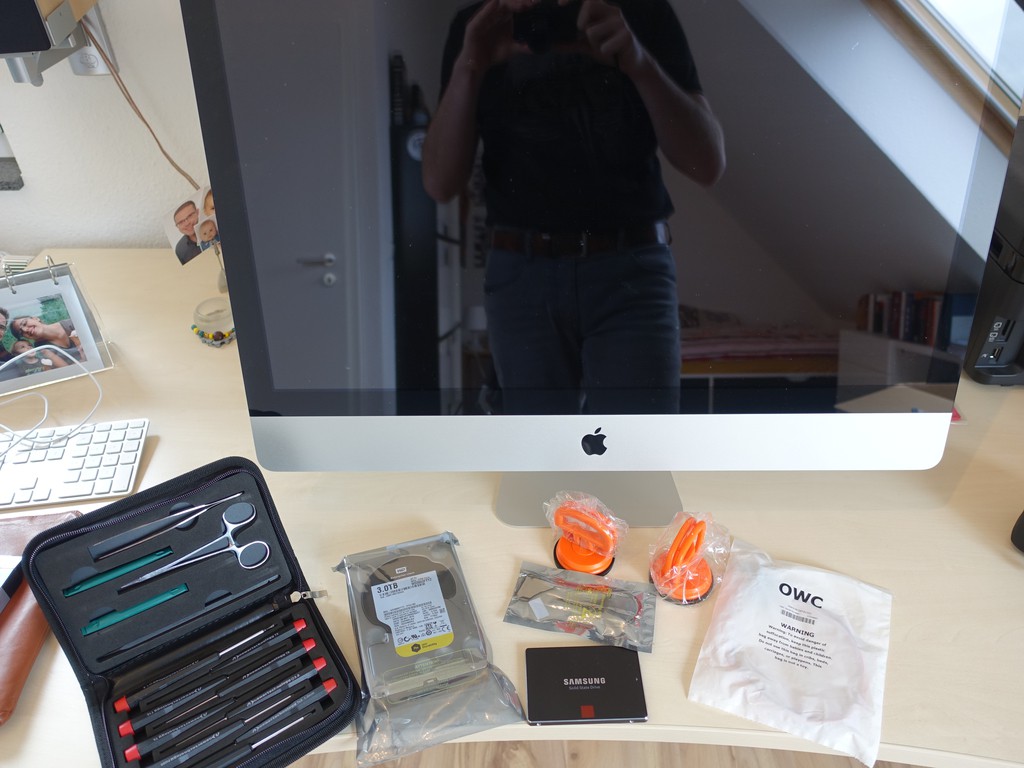 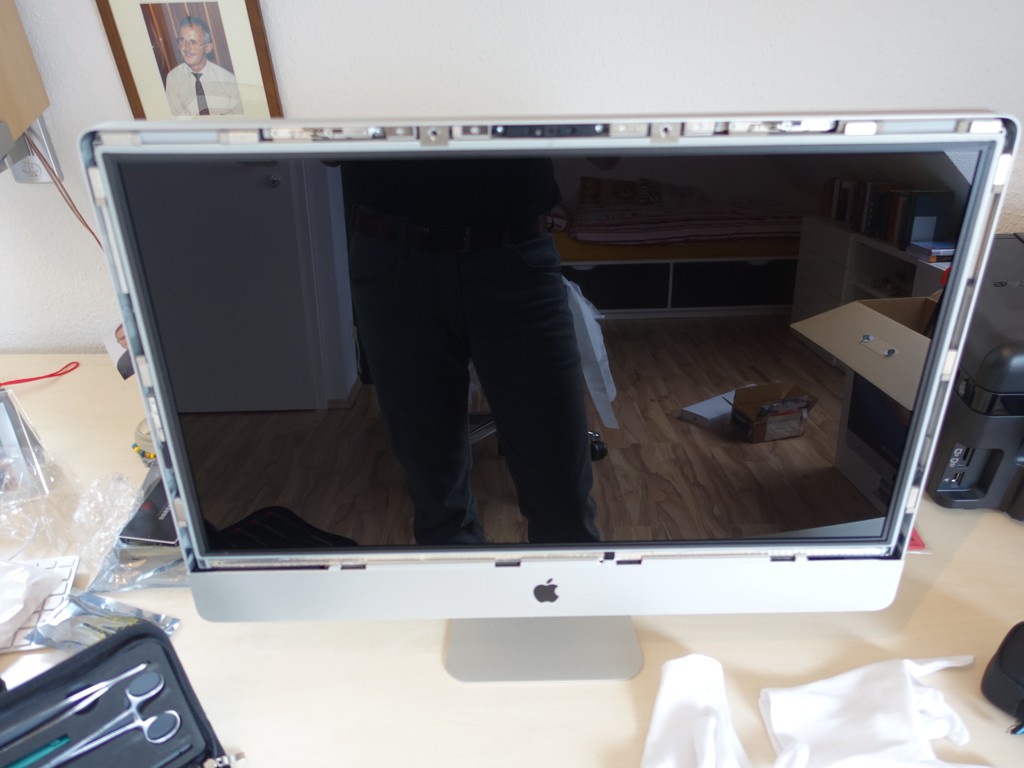 Display removed. In the center the original drive, the optical drive (which is gonna be removed in a minute) and the mainboard, which must be losened to get to the SATA port for the additional SSD: 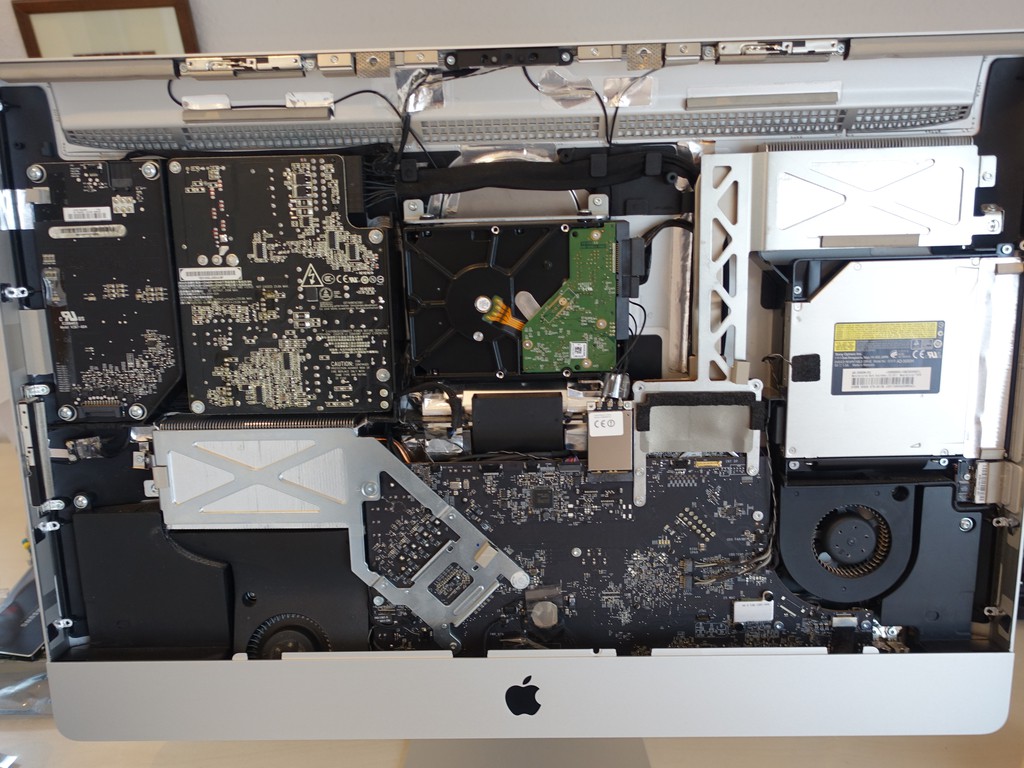 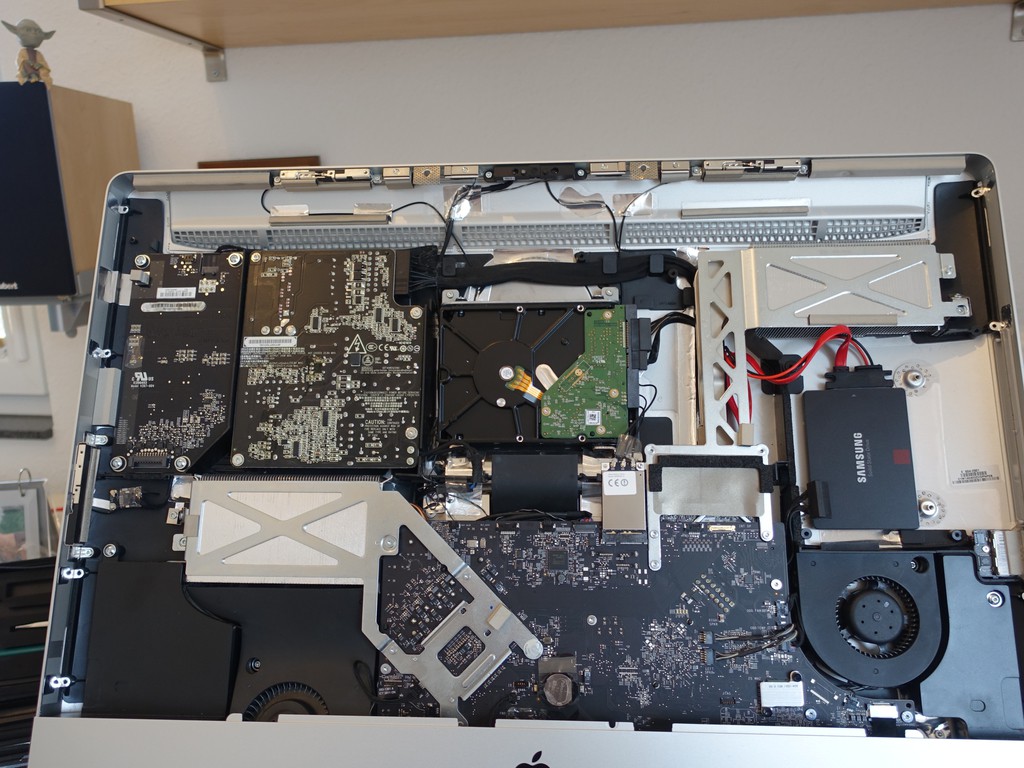 New HDD in place. You see the OWC cable with the thermal sensor i’m going to attach to the disks back: 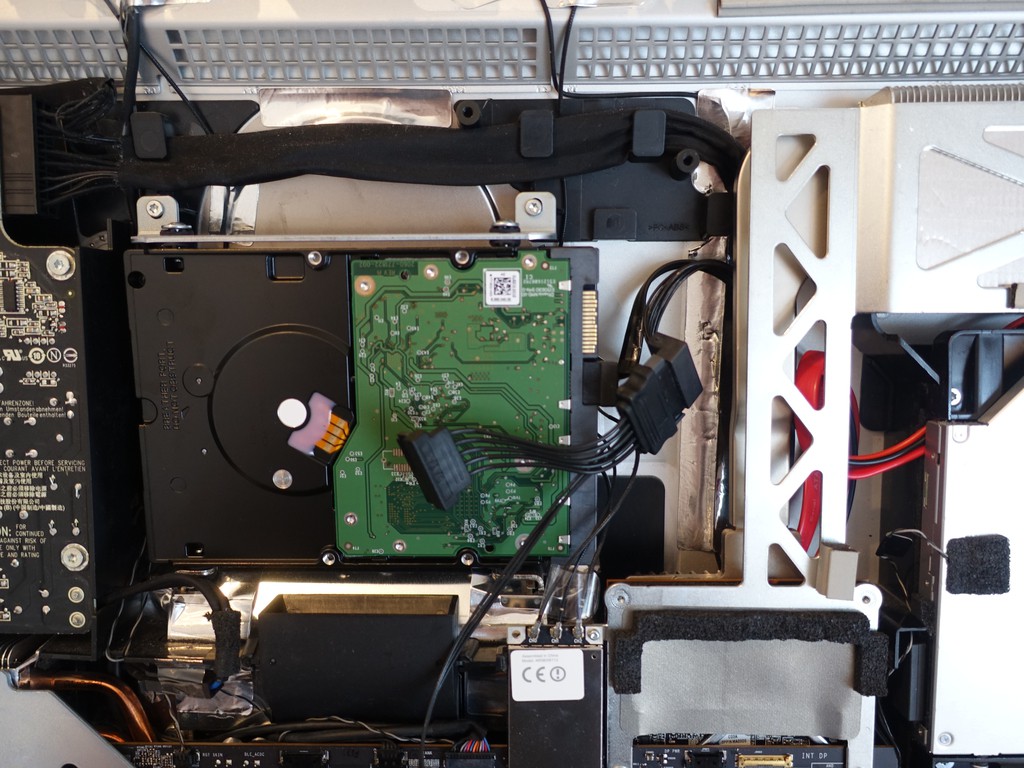 Proud son helping my putting the optical drive back in: 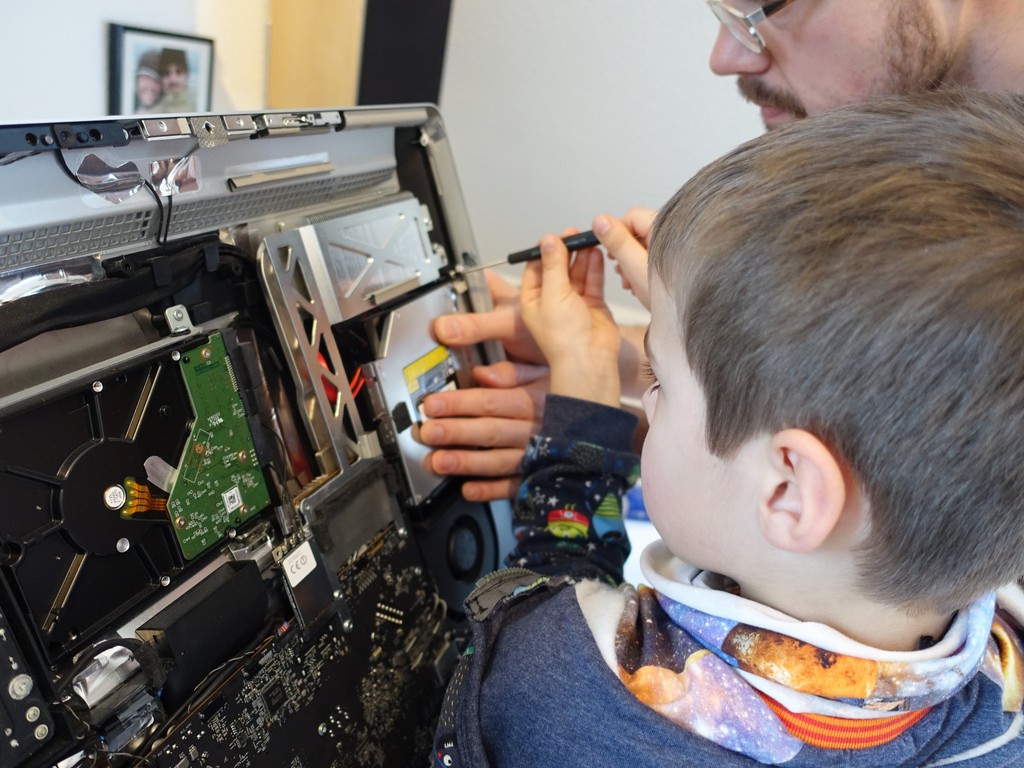 Putting the glass back in. Someone signed it from the inside. A pity, it wasn’t Steve and the team like in the original macs. You also see the white cotton gloves I bought. 2,49€ well spent. 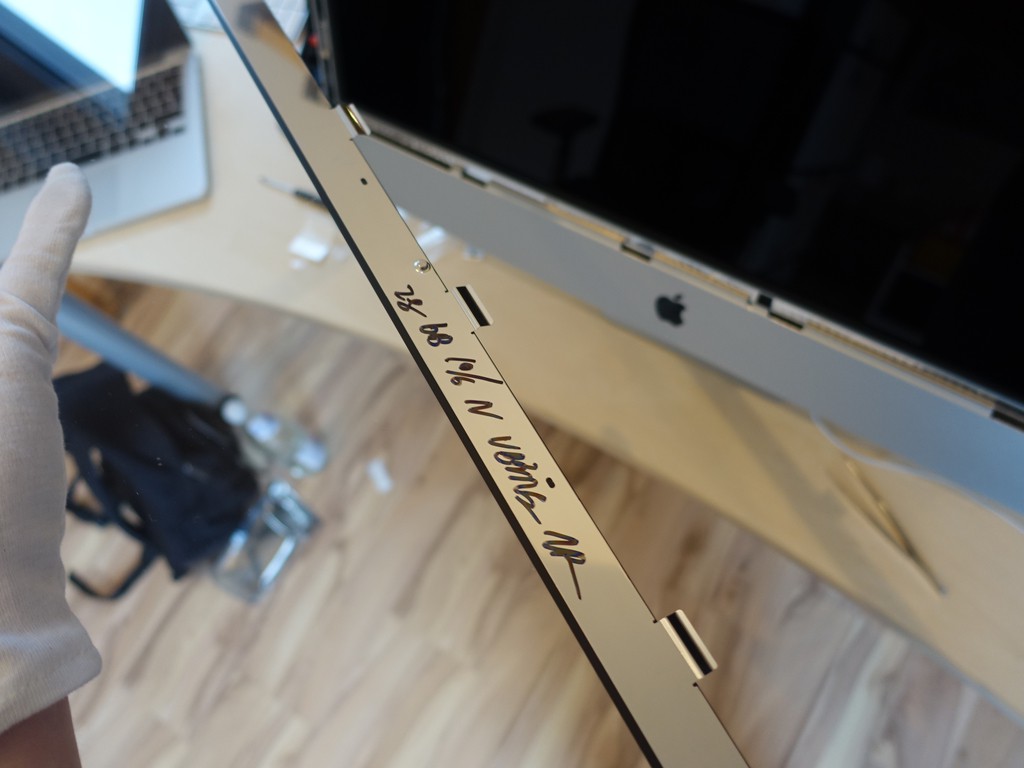 I’ve dismantled the frame and the display 2 more times. The Mac didn’t start, the screen stayed blank and it beeped 3 times. What else could it be if not the display power or data cables? Well, it turned out, my wife was right, as often. It was the RAM, i didn’t snug in properly.

Setting up a fusion drive and migrating the data

The nice thing about macs: You can boot them from nearly everything and it has been this way since i’m using macs. From FireWire, Thunderbolt, USB, NetWork. You name it.

I’ve booted the machine from one of my backups (wouldn’t want to touch the original data) and set up a fusion drive like this:

You’ll see some output but that’s pretty much it. If you’re planing this to do your self, i guess you know what you’re doing, so i don’t dwell on it here. It’s important to to this not from the original installer but from at least 10.8.3, otherwise it creates just a bundle of disks, not a “real” Fusion Drive.

This will enable TRIM on the SSD part after an obligatory reboot. If you’re on an earlier OS, you need 3rd party tools.

After that, i booted the iMac in Target Disk mode, hook it to a MacBook and also my original disk, started Carbon Copy Cloner, waited some hours and after that: Ready to go. Super nice.

The only stuff causing problems has been Microsoft Office 2011 for mac and some Adobe products tied to the hardware hash which has been changed by the new drive.

I really like the mid 2011 iMac. It offers all the ports i need (it has FireWire 800, Thunderbolt, a lot of USB ports), it still has an optical drive (which i need for ripping CDs) and a SD Card reader in an accessible place. Also: It’s pretty easy serviceable. Though it looks complicated opening the the front, it isn’t.

I’m really happy with the results. The Fusion Drive works incredible well and the storage i have now available in this machine should be enough for the next 5 years. Also, it feels good not buying new stuff when the old is more than good enough: The nearly 5 year old iMac feels like a brand new computer. It’s snappy from start to end. My opinion: OS X from 10.8 on is designed to work well on SSDs, not on HDDs anymore.

Reflecting on the Macs i’ve opened so far: I replaced the disk in an 20″ iMac G5 (incredible easy to open and to upgrade), replaced disks and ram in several MacBooks (the black one, the first 2008er aluminium) and also had my hands inside an G4 MacMini and several Intel based MacMinis. All the computers are really beautiful on the inside and it’s a pity that Apple is doing their best to seal away their current hardware. Though i understand if from a business point of view, i don’t like it at all.

Also migrating systems on Macs has always been easy. The user account on this machine is basically the same as 12 years ago: It’s been migrated from an iBook to an G5 iMac to several MacBooks and onto this Intel iMac. This time i didn’t use dd for migrating the data but Carbon Copy Cloner, as i didn’t want to work on the partition table again.

Whereas i always like buying new stuff and upgrade, it’s over. All the stuff we are using, so powerful, most of the times expensive, it’s planed obsolescence is so obvious that i don’t want it anymore. I’m happy to be able to use this Mac for some more years. Maybe i’ll add some more RAM later this year as I plan to try out a new server infrastructure using Vagrant and Ansible.

This entry (permalink) was posted on February 22, 2016 at 12:16 PM by Michael, tagged with Ansible, Hardware, HDD, iMac, obsolescence and categorized in Apple, English posts.