This is the forth and final post in my series of Running free… A developers story of development.. Under the title “More lessons learned” I collected several other things that have been important for me to realise and to change or at least think actively about. 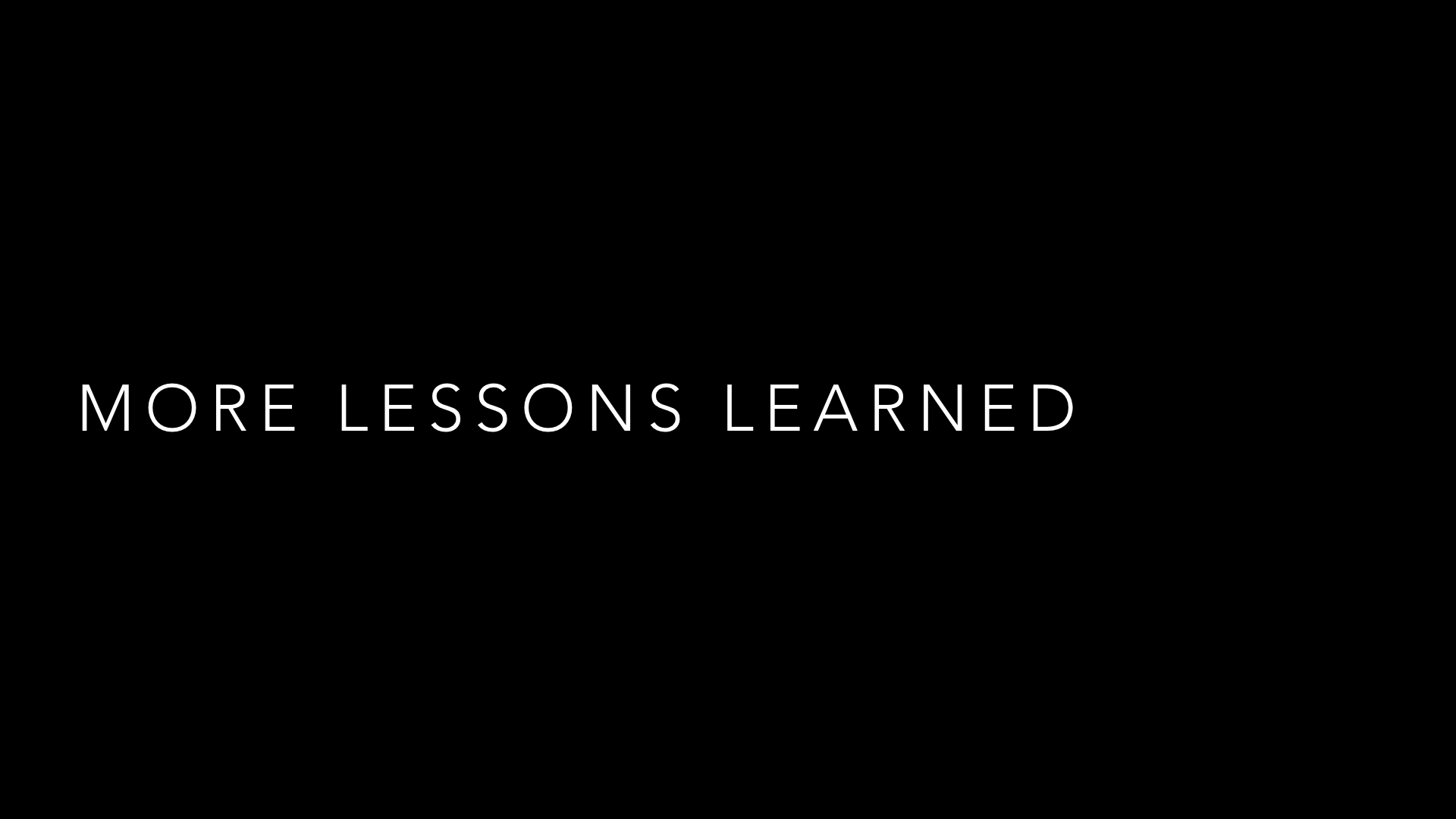 There are couple of other things I realized are important for me.

Everybody nows about FOMO, the fear of missing out?

And also the red bubbles on your phone? 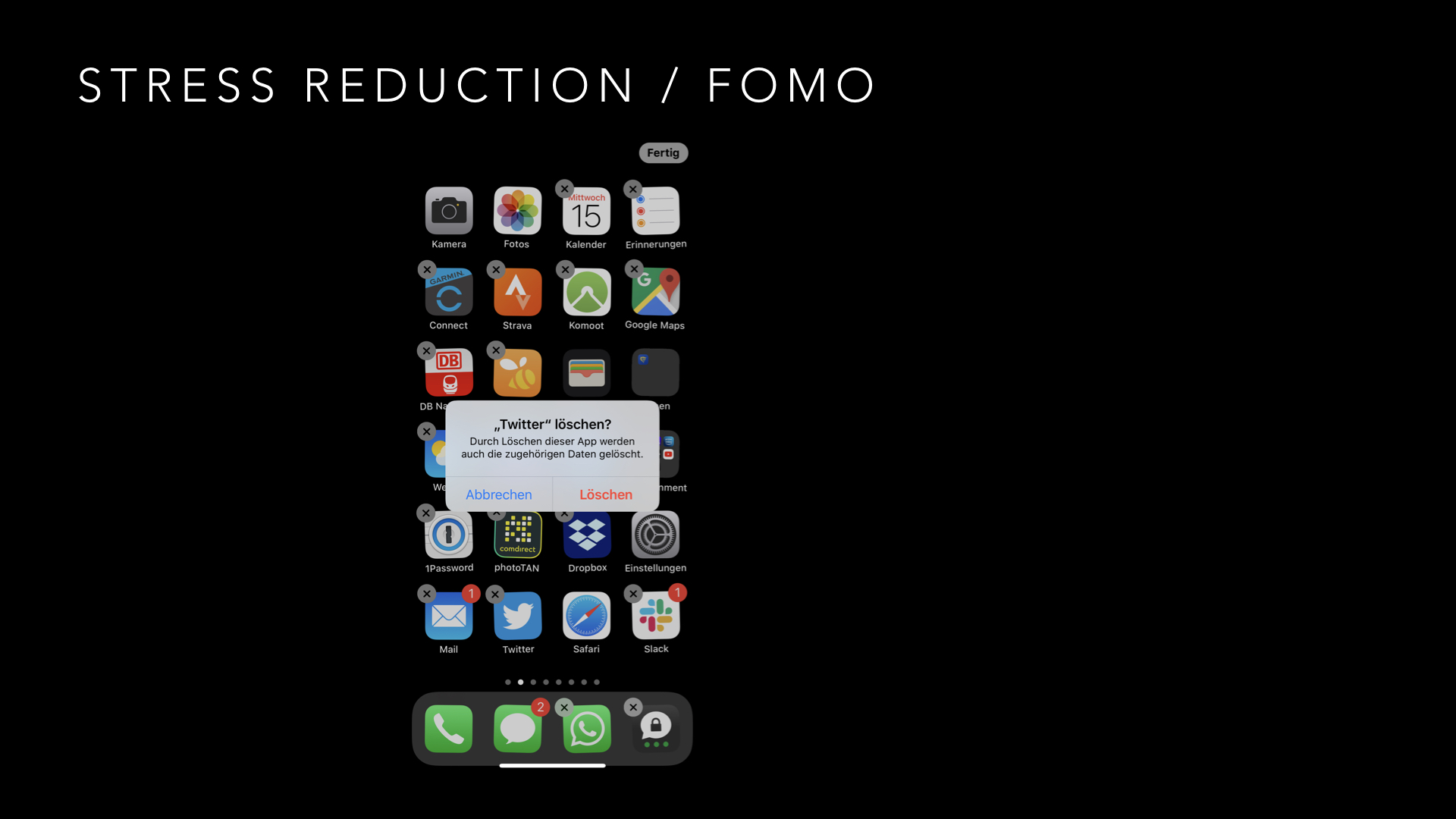 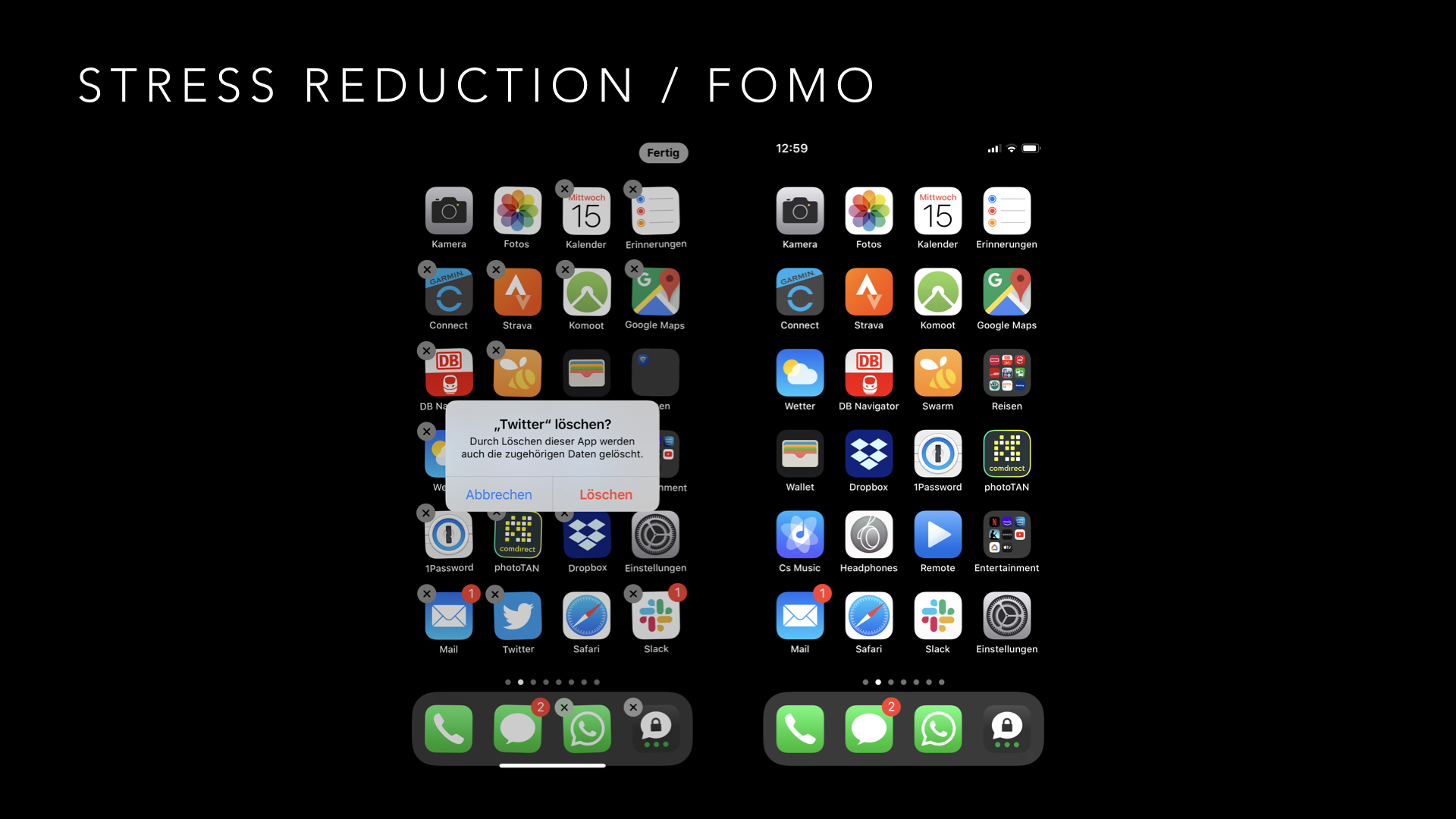 And I have to say: I couldn’t do without it.

What I have now is turned off all notification popups and only red bubbles for DMs AND moved twitter to my second screen.

As simple as it my sounds: Stuff like this is big source of stress. Be mindful about it.

The thing about sleep 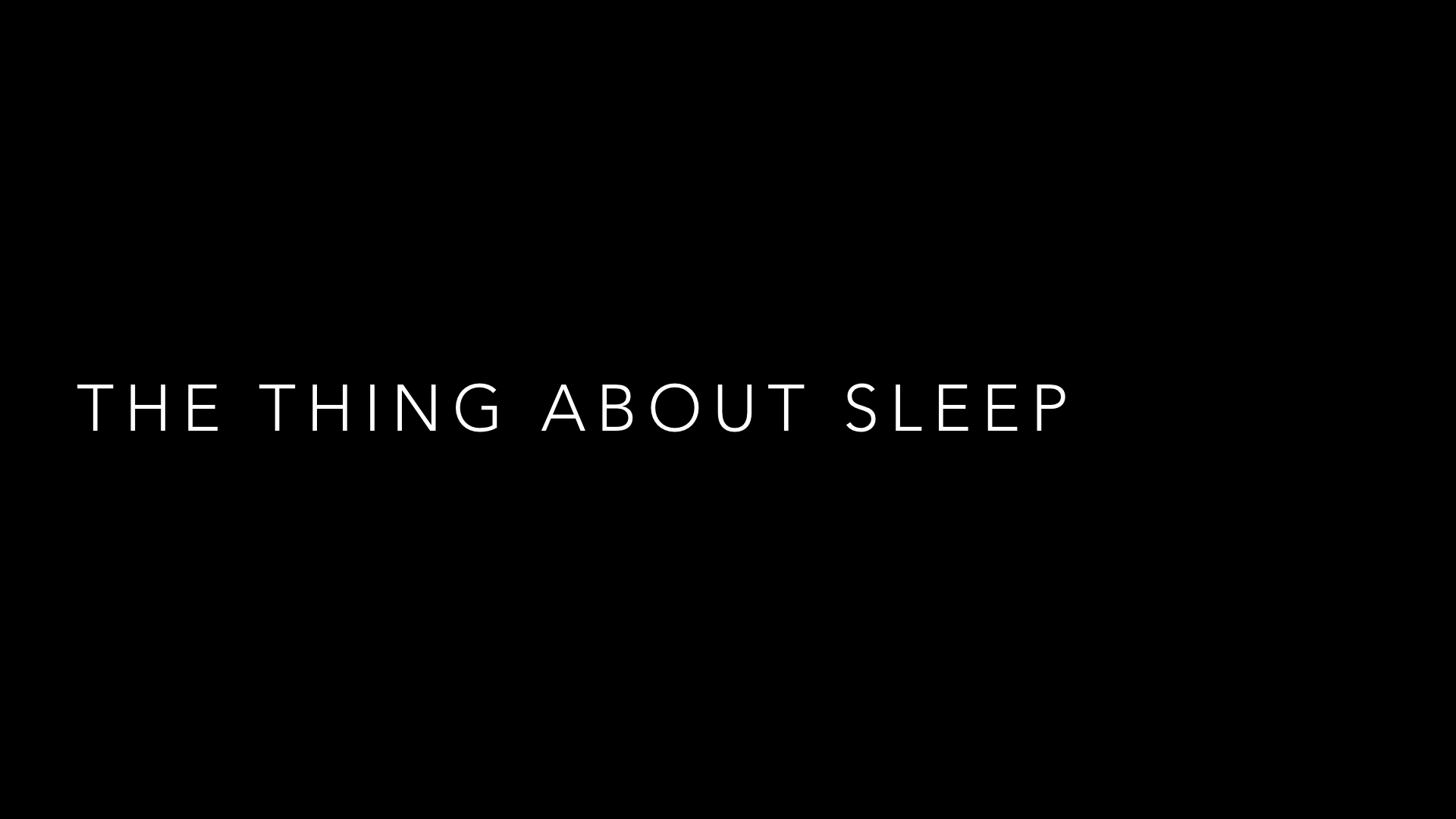 Sleep is a mysterious thing, isn’t it? It overwhelms you at times you want to stay awake and leaves you alone at times when you needed the most.

Deeply embedded in our “programming culture” is this joke: 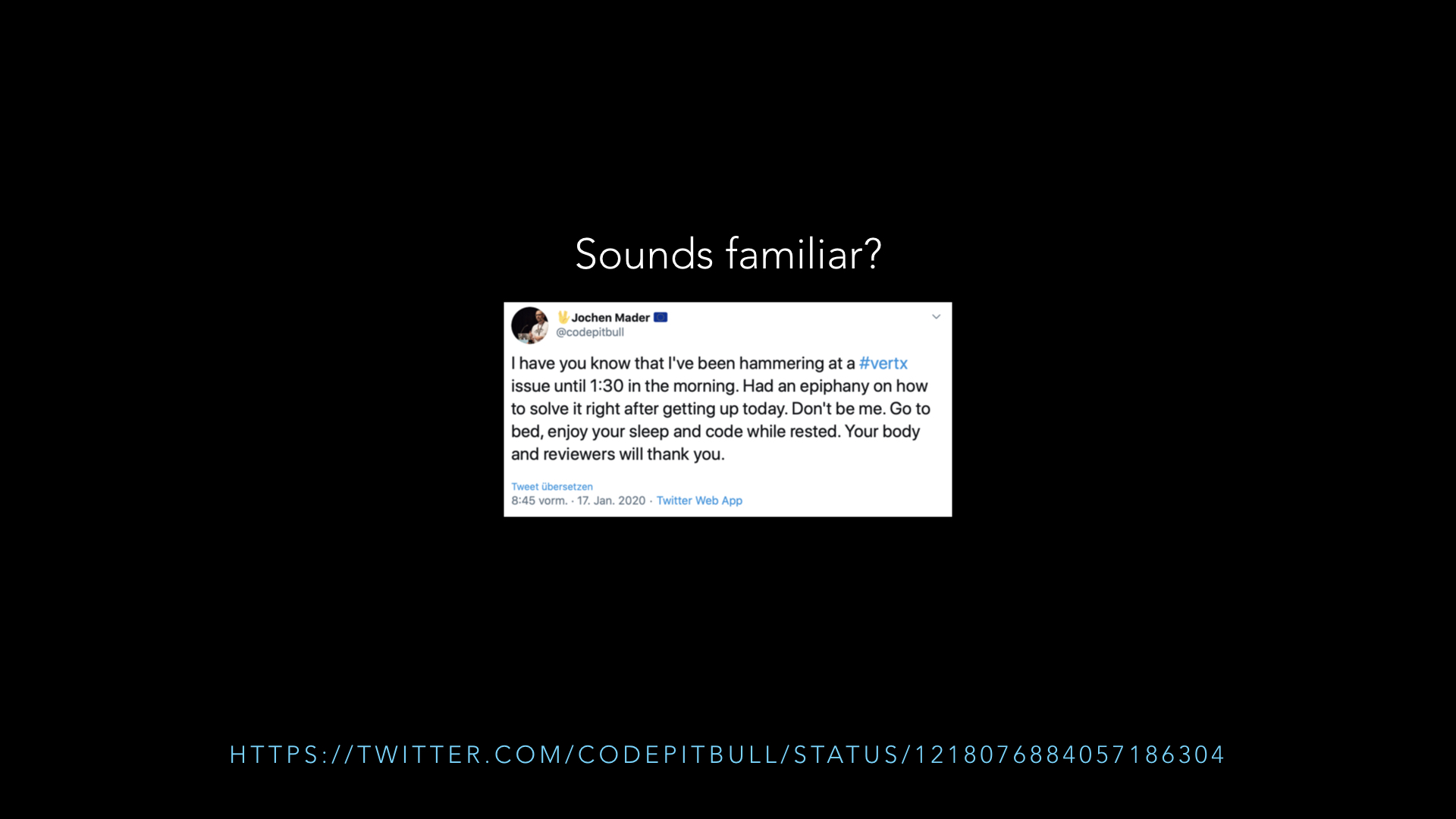 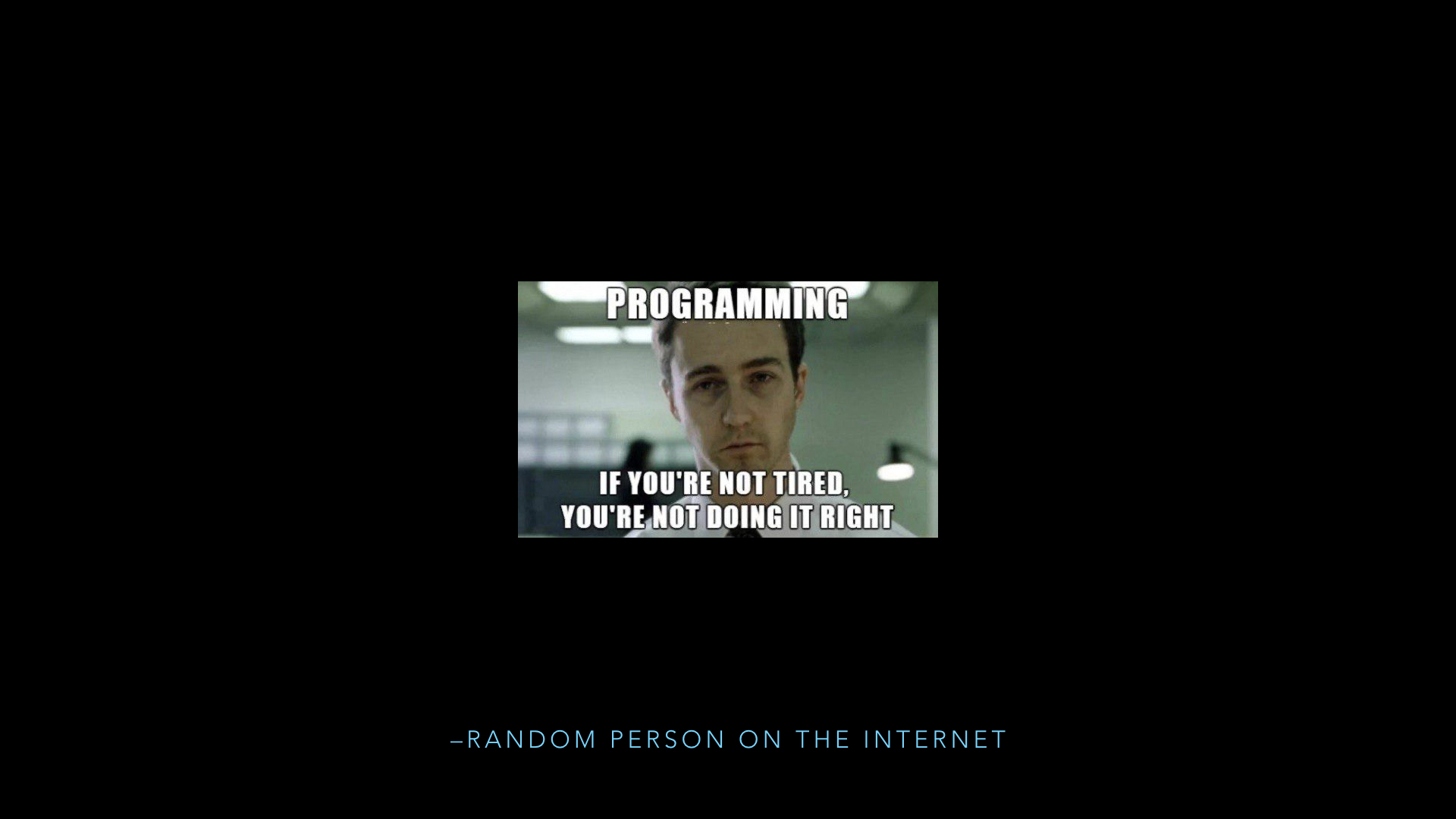 Let that sink in for a second. Being tired comes in a couple of different forms:

While I like the physically tiredness after a long run, i hate mental tiredness.

Also we should not ignore the fact that working on a screen is also physically tiring.

So a combination of mental and physically being tired, near to exhaustion is something that is required to do programming right? 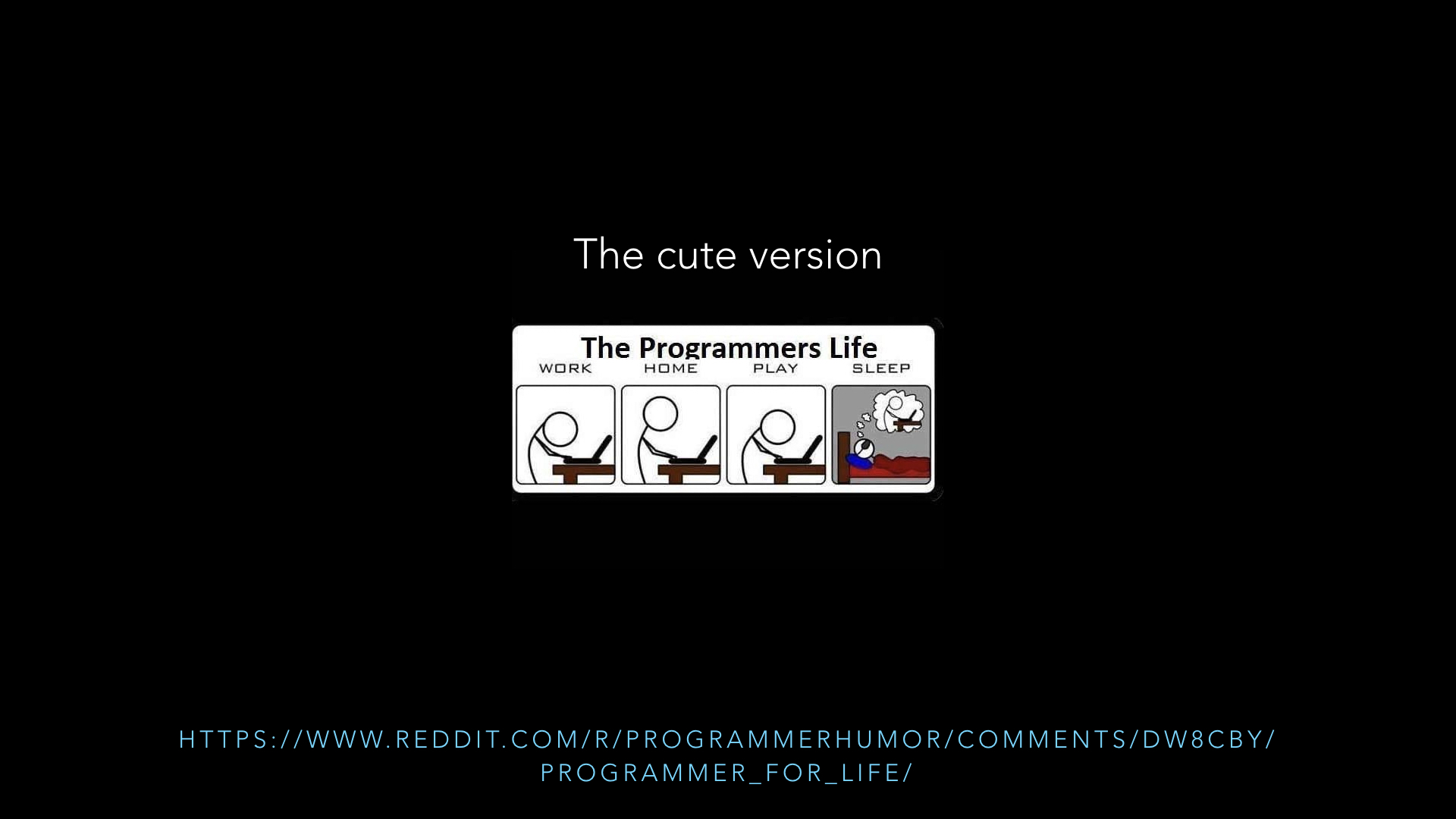 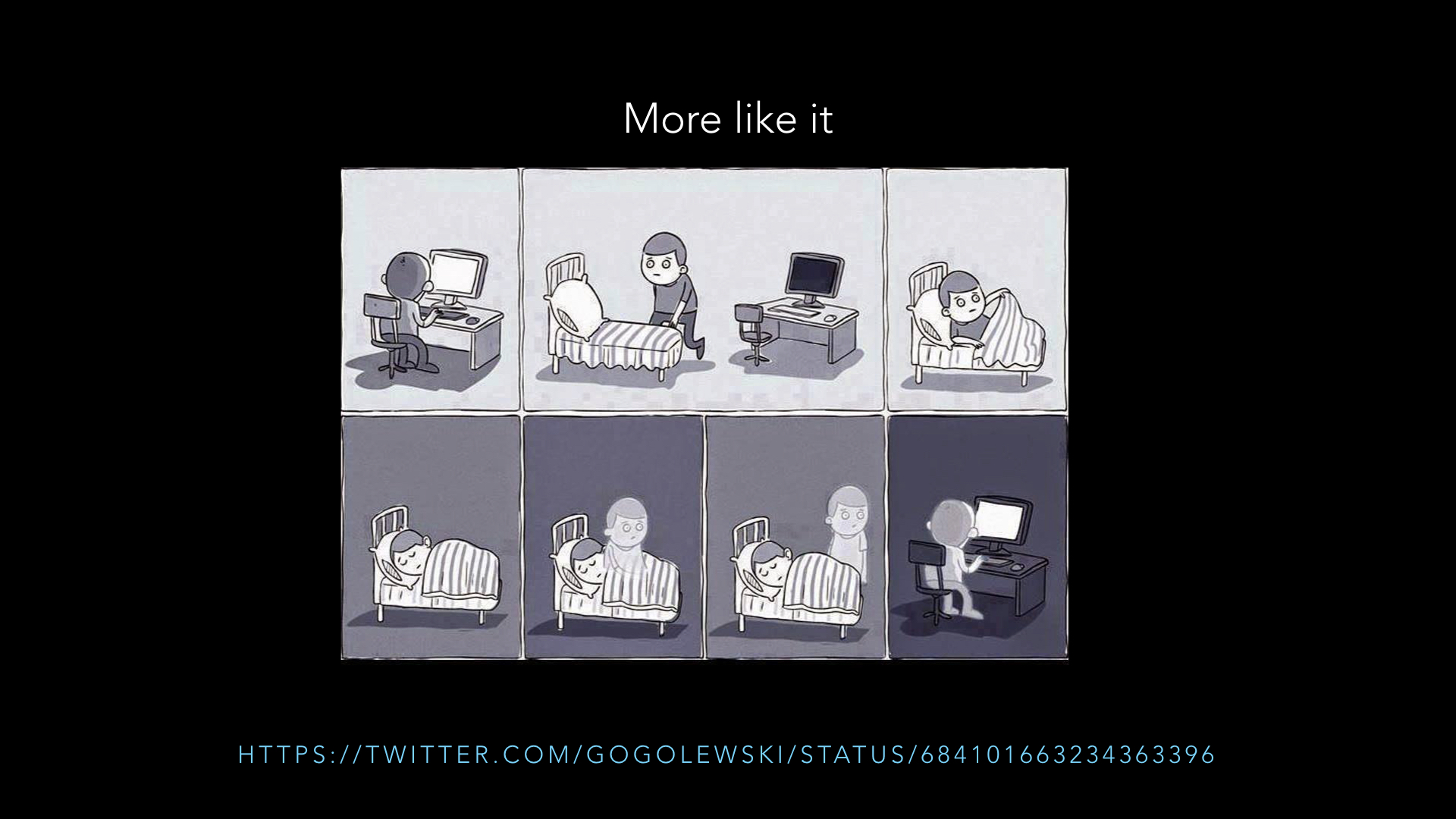 The reality often looks different and this is one version of it. You are actually aching for some rest but willingly ignore it. 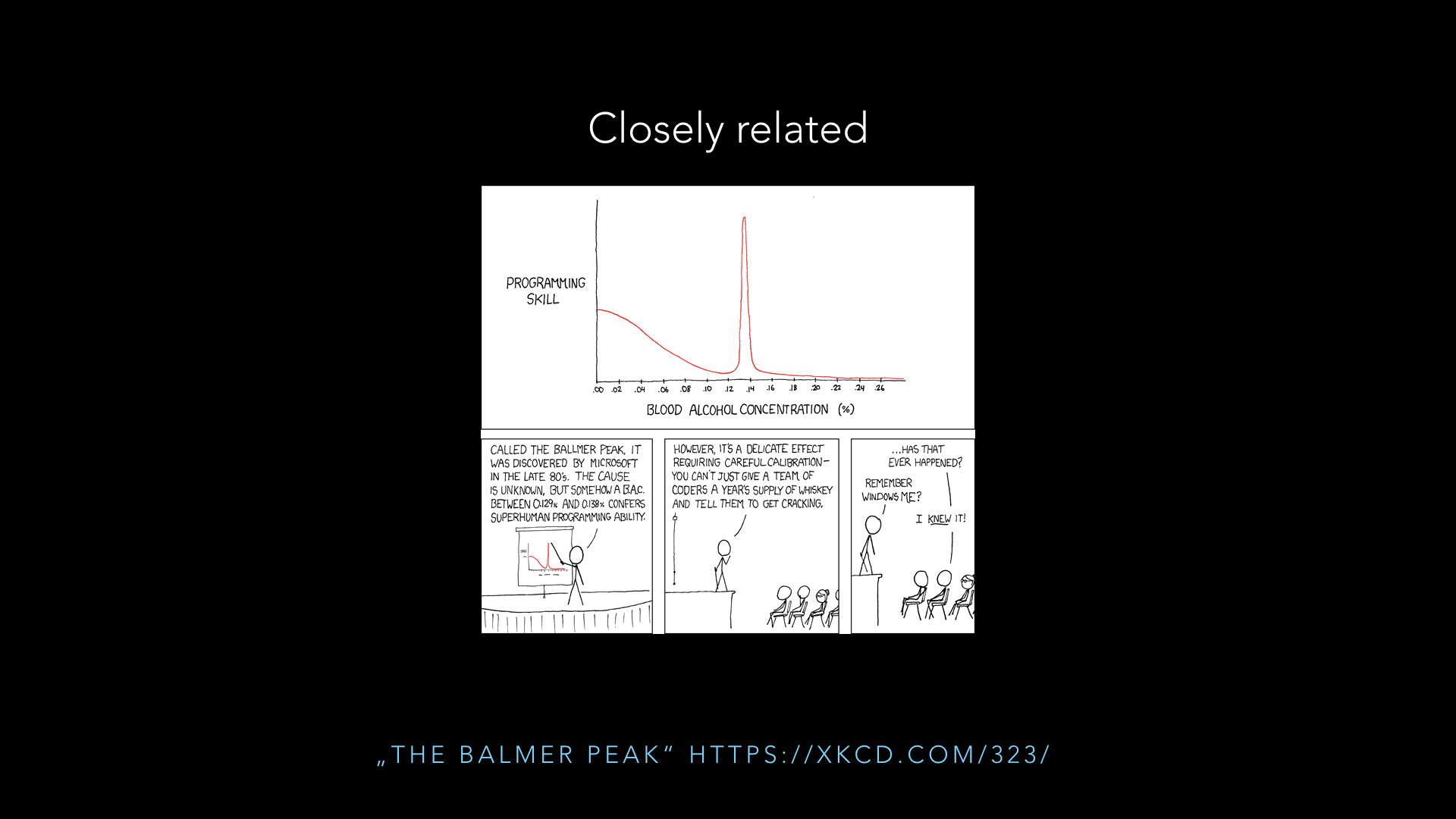 Very closely related is the Ballmer peak. The idea that a certain level of being drunk gives you super powers and turn you into a better coder.

It’s scientifically proven that sleep deprivation has the some effect in a car as driving drunk.

I honestly don’t have an idea why a slight level of dizzyness brings you much faster in the zone than being totally awake, but it works for me too. 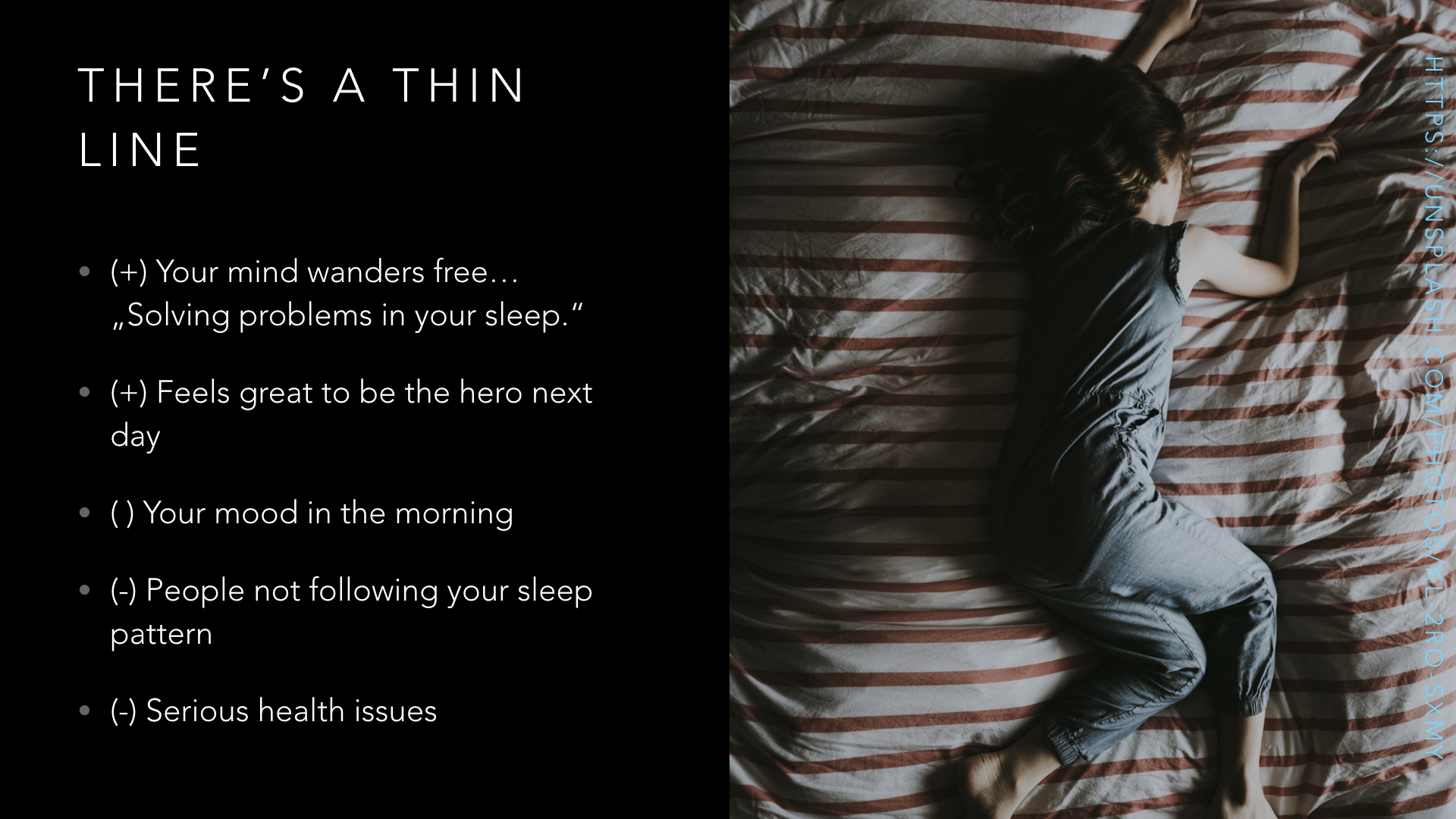 As with many things: It’s a thin line and sometimes slippery slope. I spoke with a couple of friends about that topic and we agree on two things:

There are the ones in which you start hammering away code that just shines. They are amazing and I like the result as much as you do

And then there are the ones you get stuck with a problem which a helping colleague could solve in an instant the next day. Or you yourself, with a clear mind. They suck: You get in bed, cranky, you get outta, even more cranky. They suck.

Depending on how often you find yourself burning with passion and sacrificing not only your spare but also your sleep time, you will have a hard time communicating with people not following your weird sleep pattern. Those people might be you partner or your colleagues. And at times, both.

And eventually, even short time sleep deprivation will result in serious health issues. 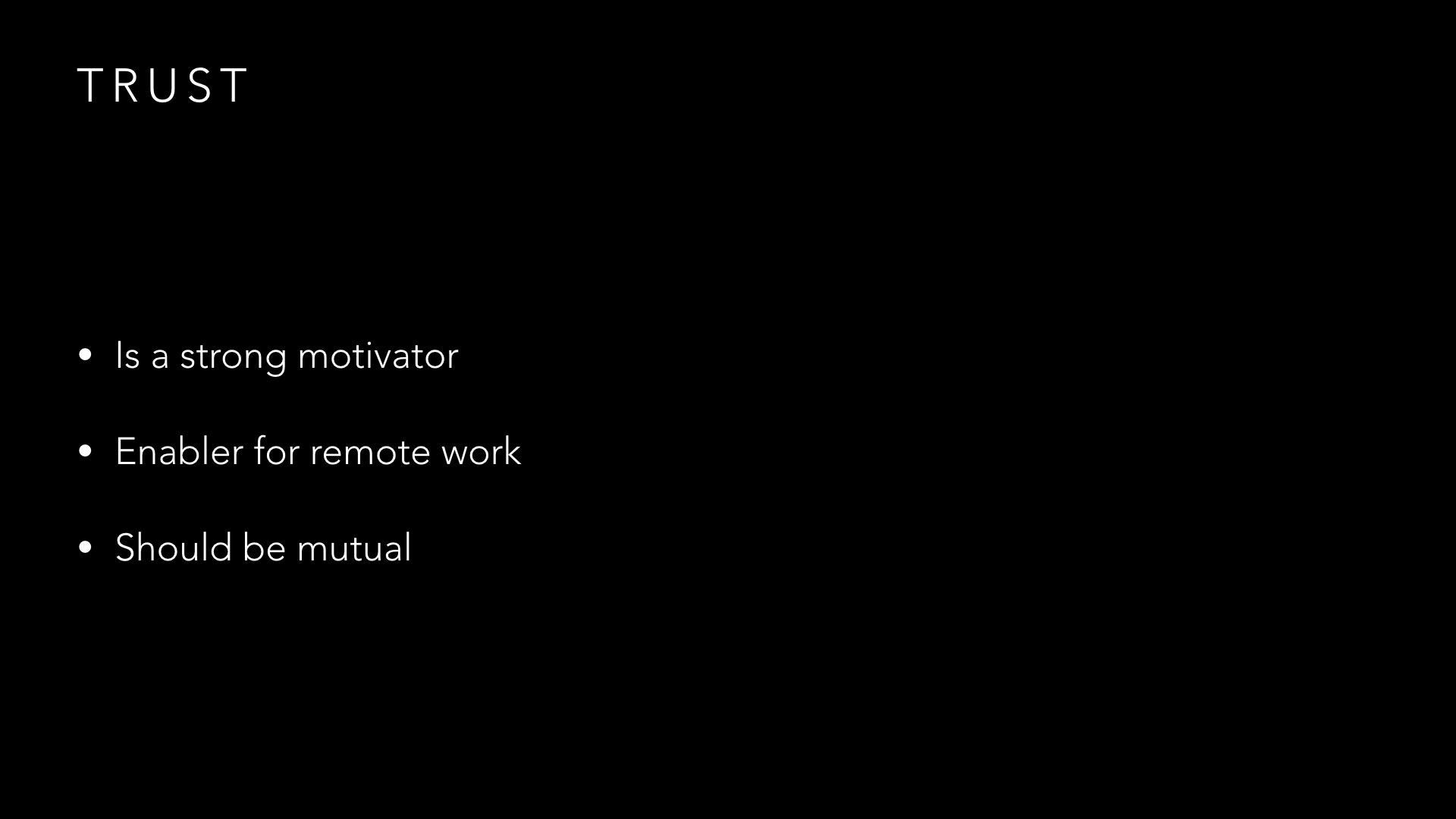 Trust is a big word, but an important one.

Trust is a strong motivator. Since 2 years I work 100% remote for Neo4j. Neo4j creates the database with the same name and a couple of other things. From day 1 I received a lot of trust. Those people sending me a laptop, screen and stuff before I even officially started. They trust me that I don’t slack around the whole day.

This is a strong motivator for good work. I would like to pay back that rust.

Trust is an enabler for remote work. Together with the fact that we work task oriented and not that much clock oriented, I have a lot of freedom. This improves my life, the ability to balance family, job and my sports in an optimal way.

Trust needs to be mutual. Between me and the company and also between colleagues. Trusting in a common goal and a common interested to reach that together brings really good work relationship.

And for what it’s worth: You spend – even being remote – at least one third of your day with colleagues. I want that to be a relationship on the same level, with mutual trust that allows the assumption of good intentions. 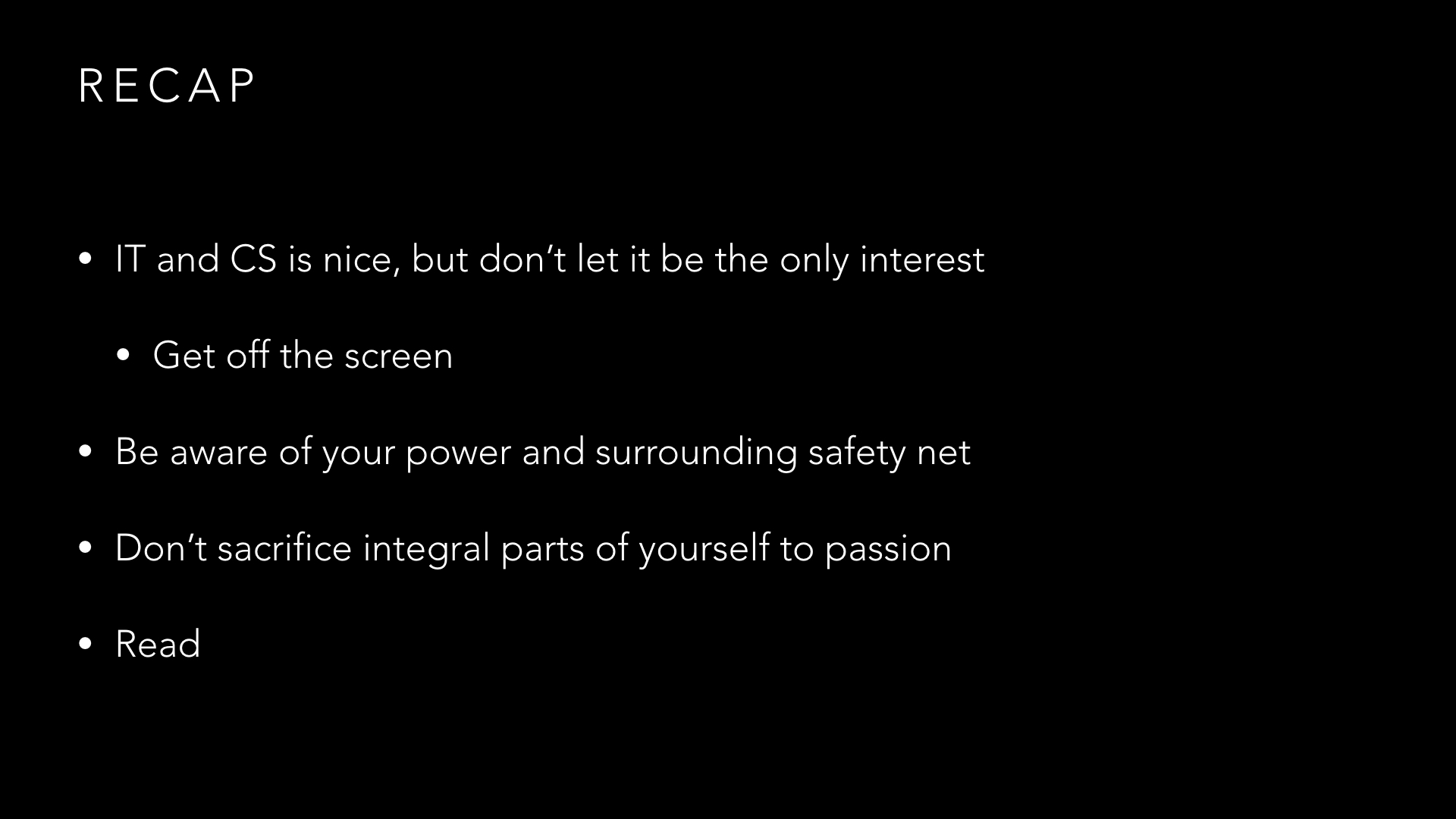 I told a personal story here, centered around running at first sight. I needed the focus shift that came with it to realise various things.
Most of them boil down to some simple facts: Don’t get your self worth only from IT projects. You are not the projects you maintain.
You wear different hats during different times in your life. Enjoy that.

Get off the screen once in a while and move around. Of course you don’t have to run a marathon. A walk is nice as well.
Try a walking meeting for example.

If things just don’t work in your current project or company: Reflect on your power. Can you change things? Are you willing to change things?
If not, change places. Often there’s a safety net in place.

Passion is important. But it needs fuel to burn. Choosing what to burn is always a trade off. There’s only so much of yourself you can burn.

Last but not least: Read. Here are some recommendations: 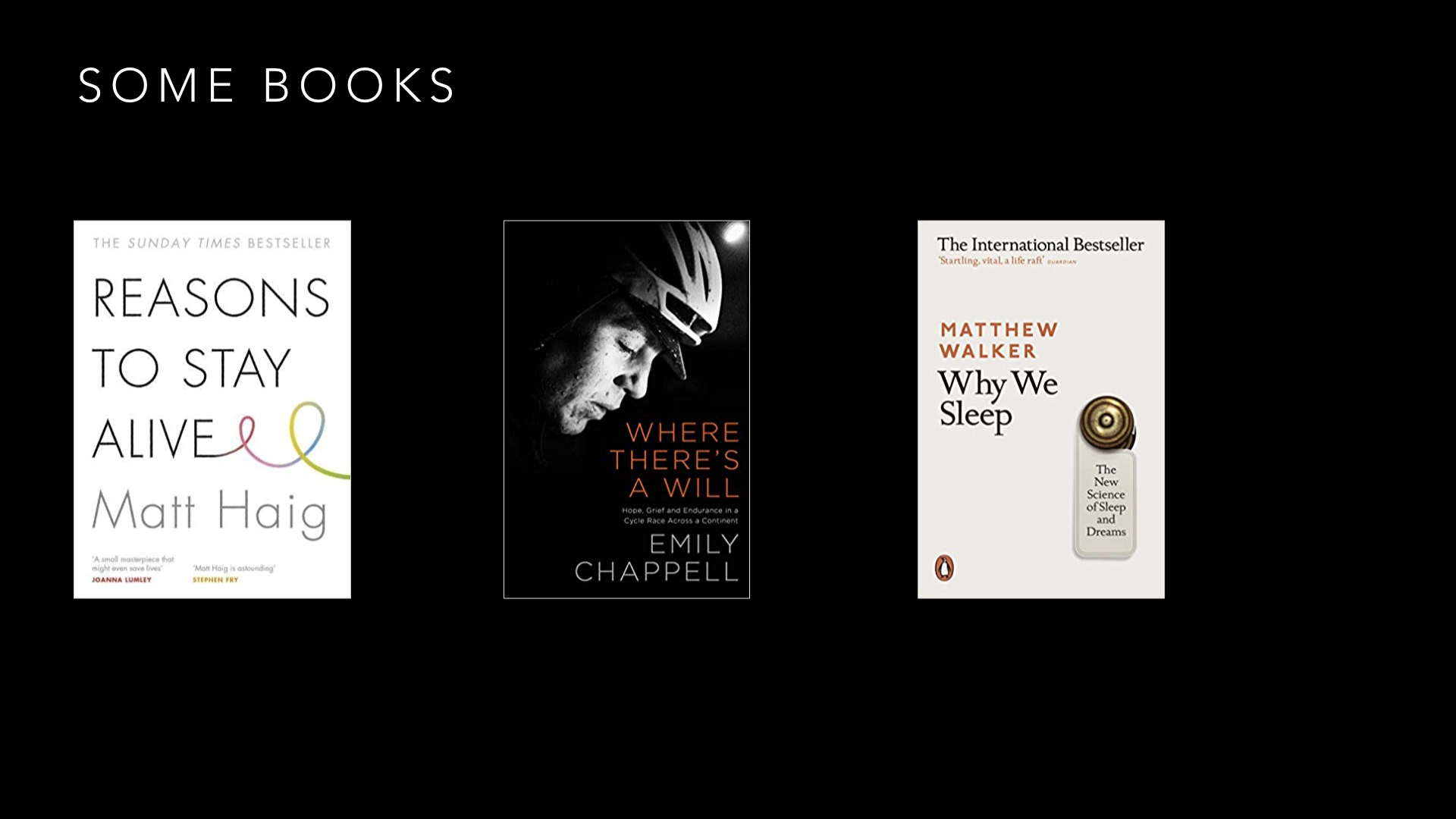 Matt Haig wrote the wonderful book “Reasons to stay alive”, in which he reflects on his depression, anxiety and the path he took in life. I can related to a lot of things in here and it has been worthwhile for me to read through his experience.

“Where There’s A Will” by Emily Chappell is about long distance cycling races at first side, but much more about what you experience beforehand, on the road and especially afterwards. A strong book by a strong person.

Last but not least: “Why We Sleep” by Matthew Walker. All I am saying: It’s frightening. In our industry people brag around about all-nighters (me included) and apparently, I have had no clue what I am doing to myself. 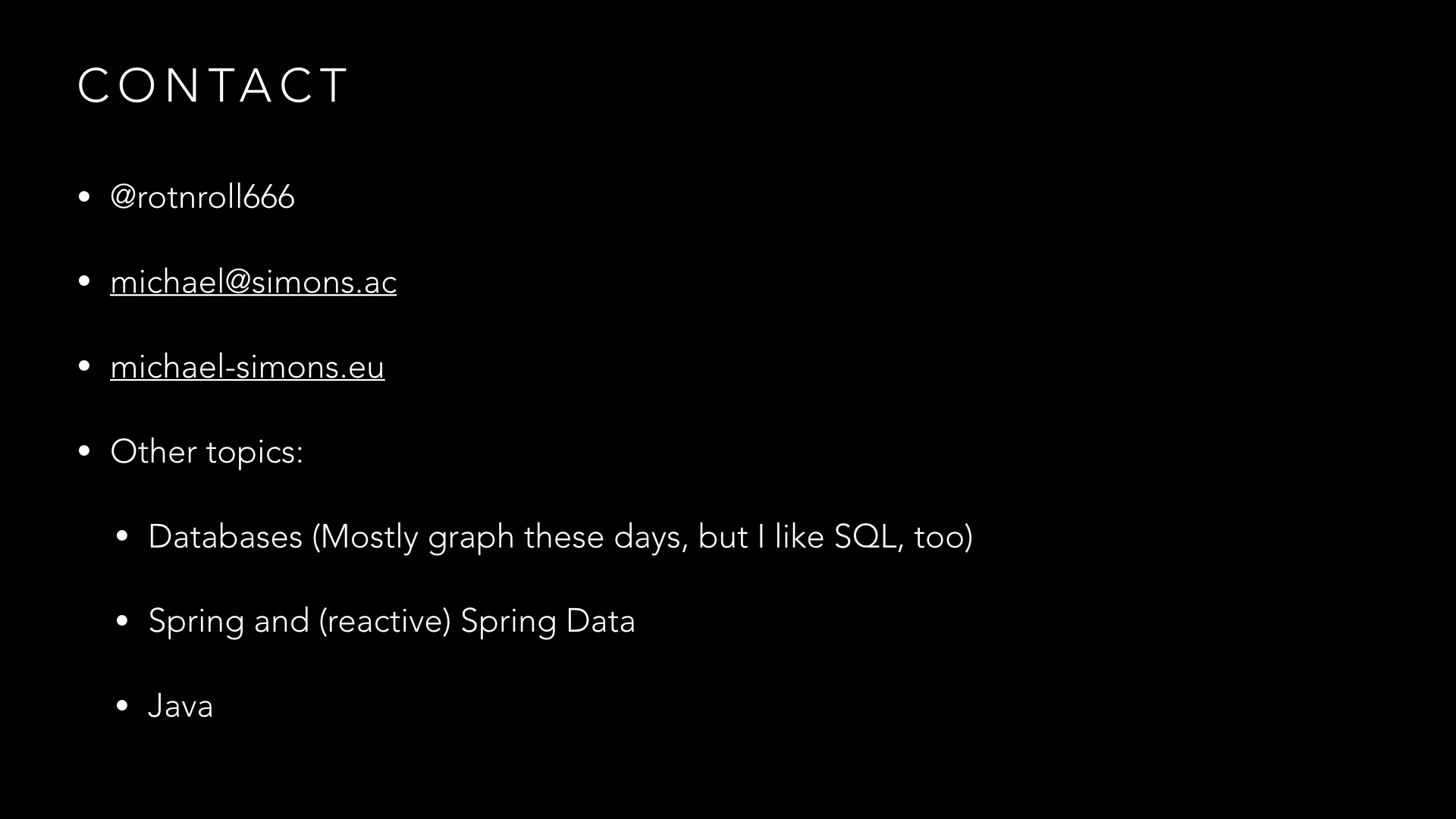 Find myself as @rotnroll666 on Twitter or via E-Mail. Reach out if you want to discuss stuff. Of course I’m into programming and IT. Most of my topics these days are database related, both graph and relational and as such Cypher and SQL), but I’m deeply involved under my Spring Boot Hat in the Spring and reactive Spring world.

While this applies, Java is there to stay in my profile.

This entry (permalink) was posted on April 6, 2020 at 8:43 AM by Michael, tagged with Books, Sleep, Thoughts and categorized in English posts.