This is the second post in my series of Running free… A developers story of development.. In this part I will focus on what actually helped me defocus my head from spiralling around work related issues and problems.

Cognitive therapy – Miles are my meditation 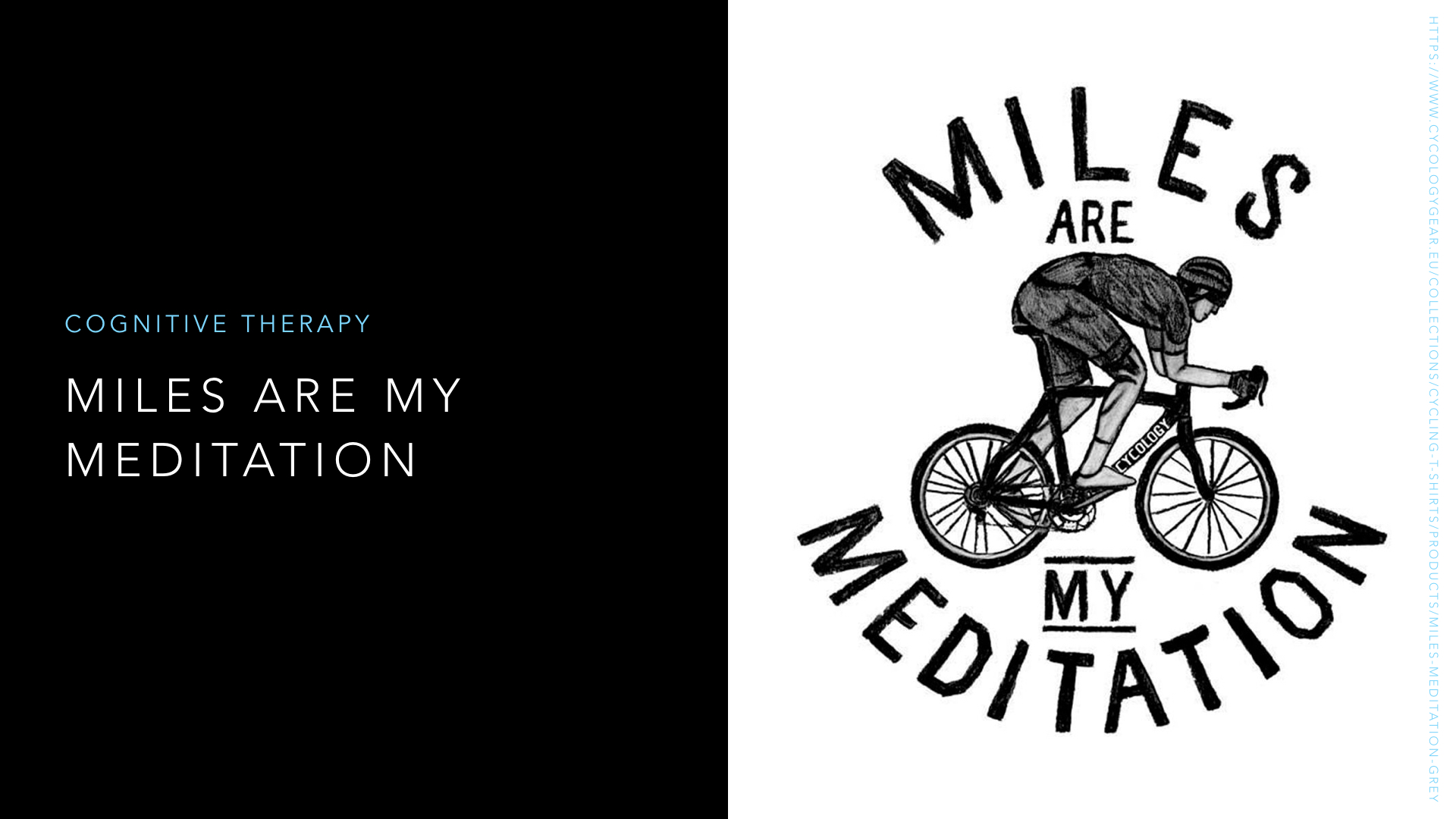 In 2017, I was writing my second book, running the EuregJUG was a great success and on the outside, I was as successful as it get’s in my company, but I was feeling worse every day.

I tried a couple of things that I thought would be expected of a successful mid thirty guy (aka a dude with a full blown midlife crisis) and define myself better:

Result: I looked stupid, spent to much money, got fat, sit in front of a computer even more. I needed a big shift of focus in my life, something like a cognitive therapy

I was always an avid cyclist and still managed to ride a bike nearly everyday. That was however also work related as I did commute by bike. Not much of a focus shift. 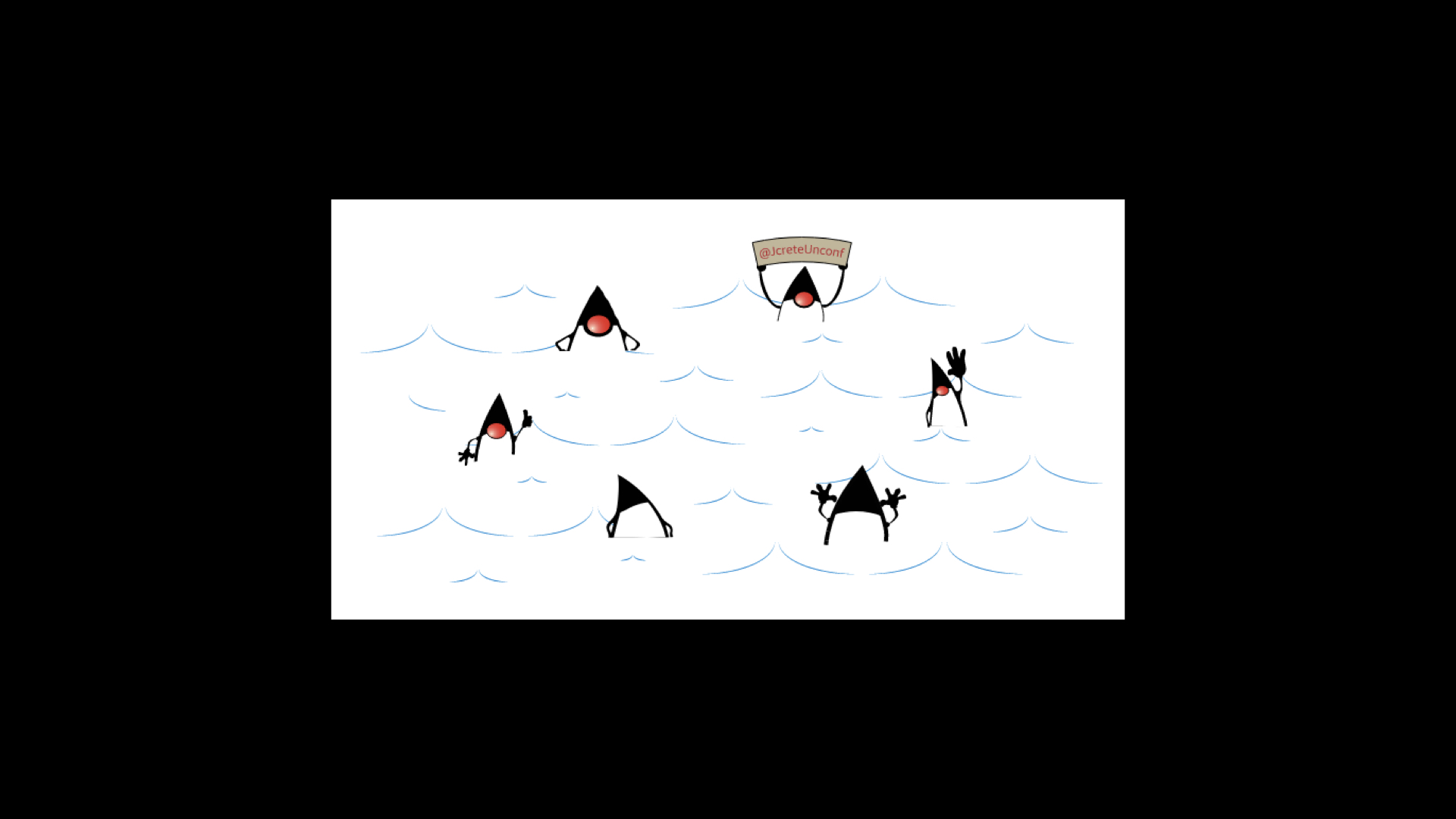 Sometimes all it needs is a good conversation and people being role models. I had a couple of those at JCrete 2017, especially with Felix and Heinz. I’m mentioning this here because of two reasons:

These unconferences offers a market place like proposal and selection of topics. Many of those pretty hard core technology wise but also with topics such as presented here.

Running – Is your bike broken 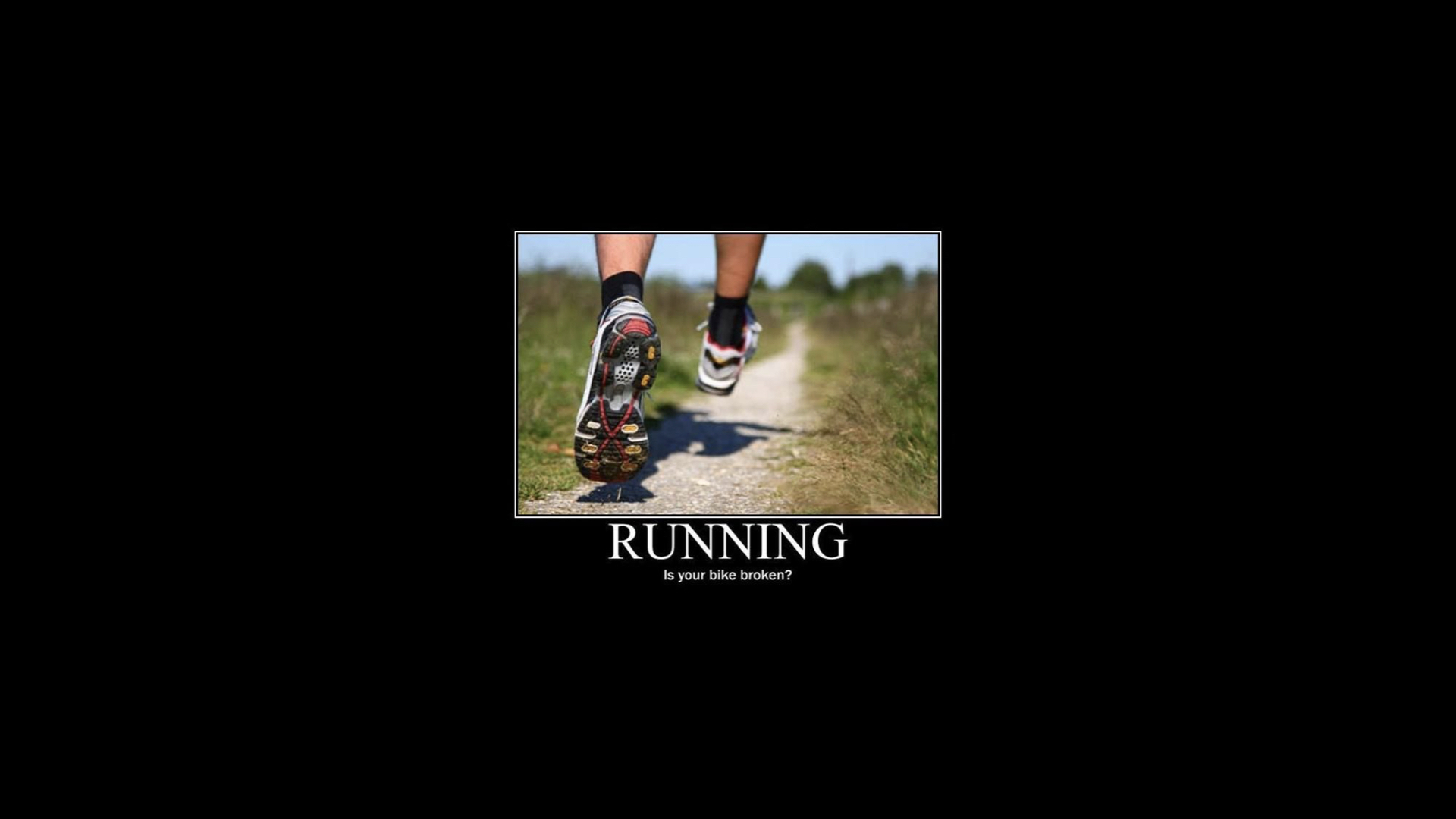 I always said that I start running on the day when all my bikes are broken.

I actually tried a couple of times to run more than a kilometer and I usually hit something like 3k and ended always at the point where everything hurt and while I’m usually quite stubborn, I couldn’t convince myself do go further.

Standard solution until then was trying to motivate me with buying more gear, but that was never longterm sustainable.

One doesn’t need much 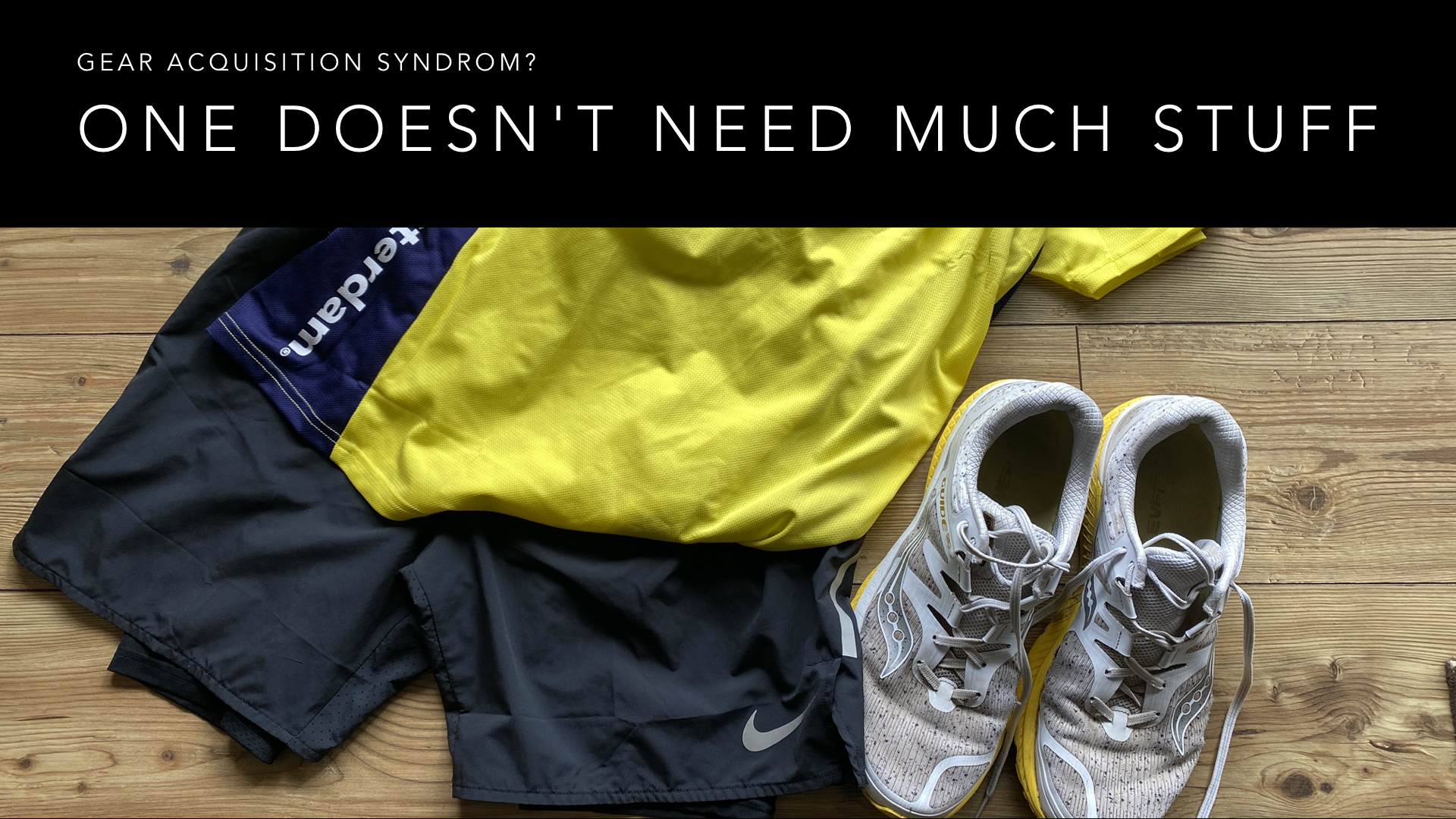 The nice thing about running is: You can get pretty far with a decent pair of running shoes. It’s a good idea to go into a shop and get some guidance for selecting a pair. I needed one that gave me a bit of balance but not that much cushioning.

I have a couple of running shirts but depending on the lengths of your run, I don’t think they matter that much. I tend to sweat a lot, so I’m more for the lightweight sports gear that transports humidity away from the body. A fitness tracker is nice, but not required. I would even say a heart rate monitor is not necessary. Usually you will notice when you are over pacing, but alas, I’m not a doctor of medicine.

Anyway, this time, I stuck with my old pair of running shoes and set a couple of other goal: 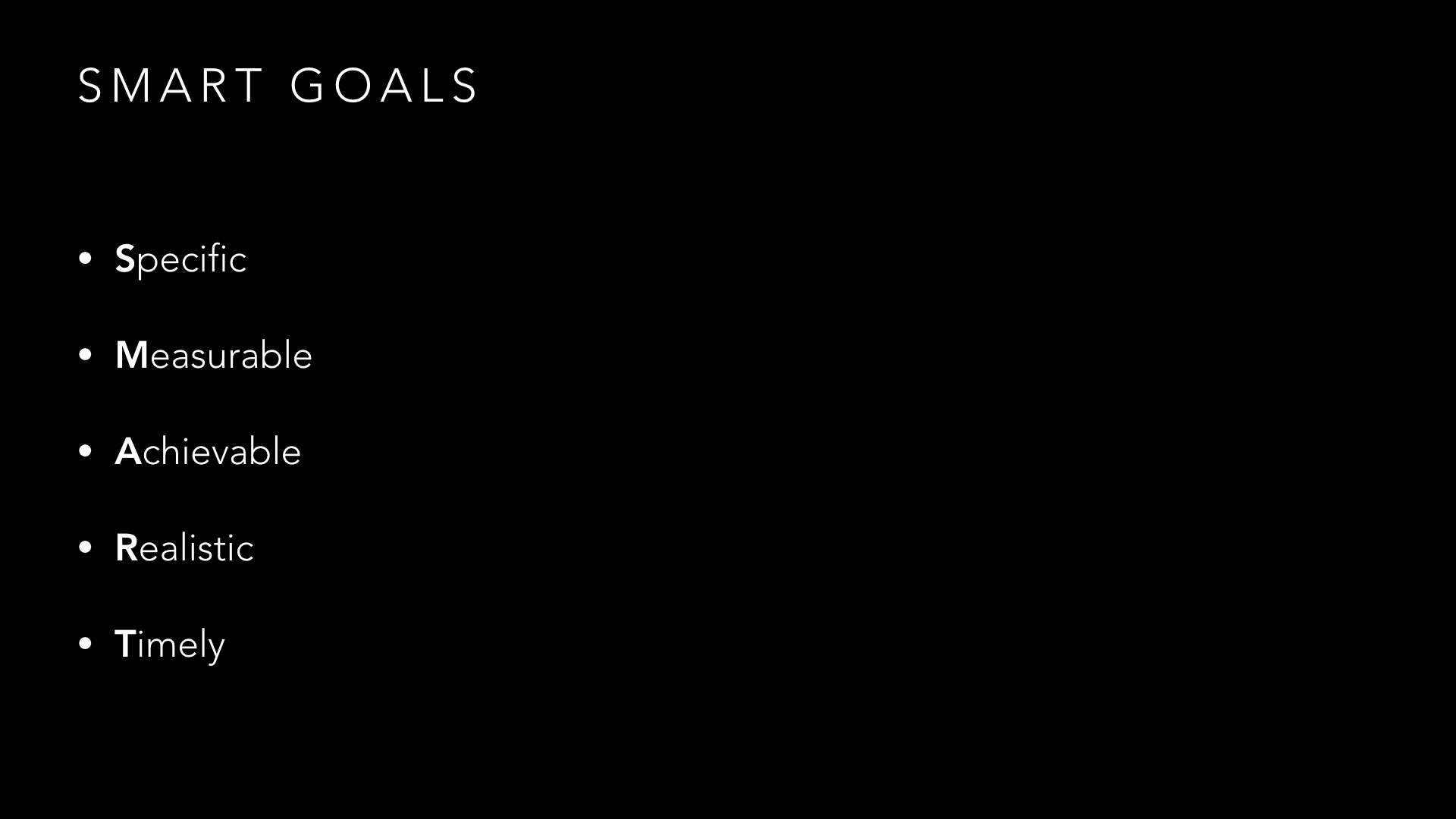 I really think that we all have a ton of intrinsic motivation in us. To access it we need goals and an environment that allows us to pursue those goals. Goals in the context of this talk here aren’t of course not only sport goals, but also professional ones. Those can be: Learning a new language (of course, both programming and spoken languages), solving the task of your job in an optimal way, making a relevant step in your career.

There are a lot of silly acronyms in project management and methodology but here’s one I really like: SMART goals. Those are goals that are:

Let’s see: I wanted to be able to run 10k by the end of 2017 and get my weight down to 80kg again. That makes already two specific and measurable goals. Are they achievable? Of course. A healthy person at my age should be able to run 10k in a reasonable amount of time and 80kg is pretty much my optimal body mass index. Both goals are realistic (in contrast to let’s say being able to compete against world class athletes). And finally, it was in the summer of 2017, 6 months would be perfectly long and short enough to achieve those goals.

Did I reach them?

There’s a nice run at the end of each year in my place. This is where I wanted to see if I reached my goal. 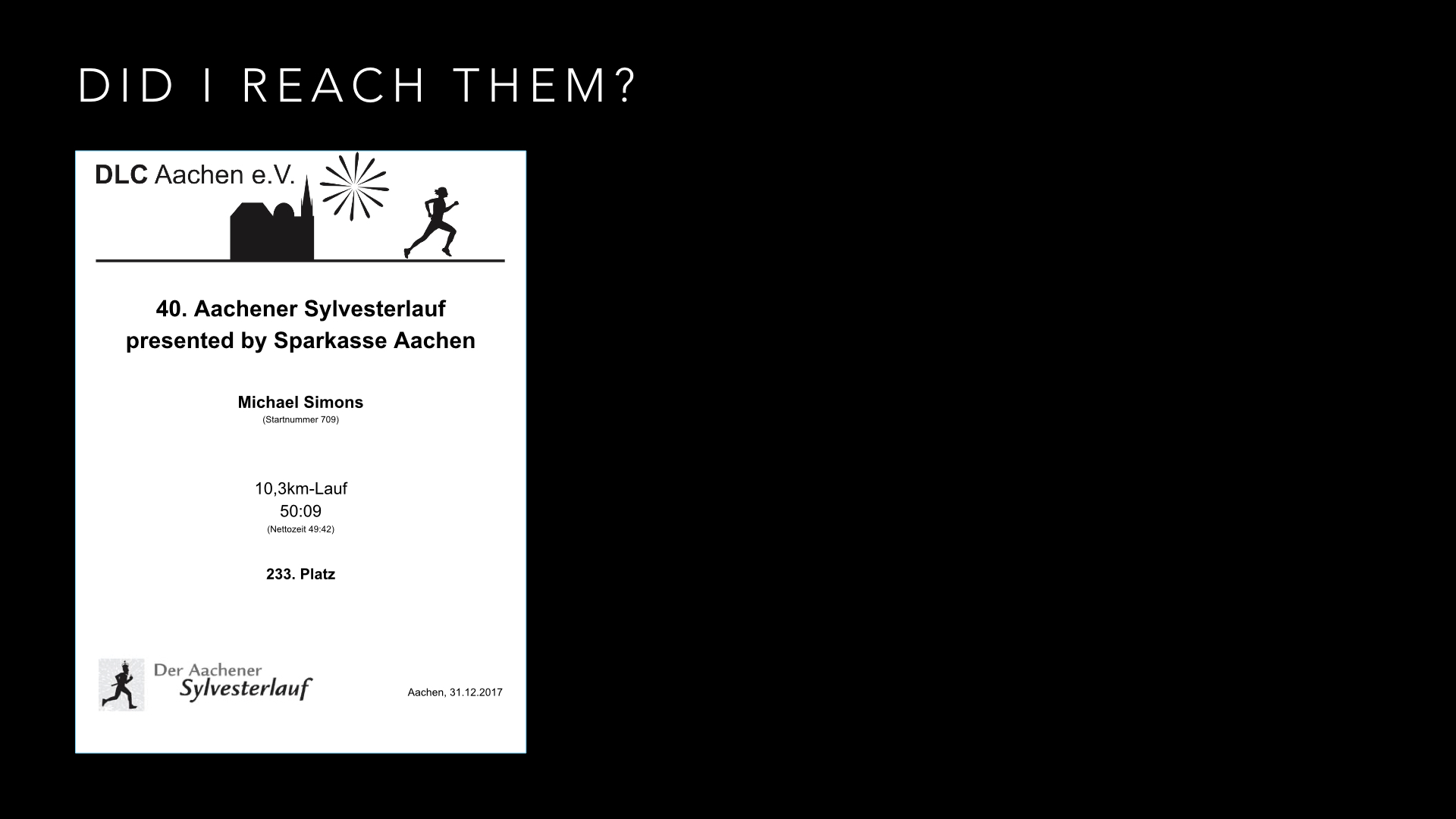 10k in about 50 Minutes. Not bad at all. I spare you the view of my scale, but I reached the weight goal, too. 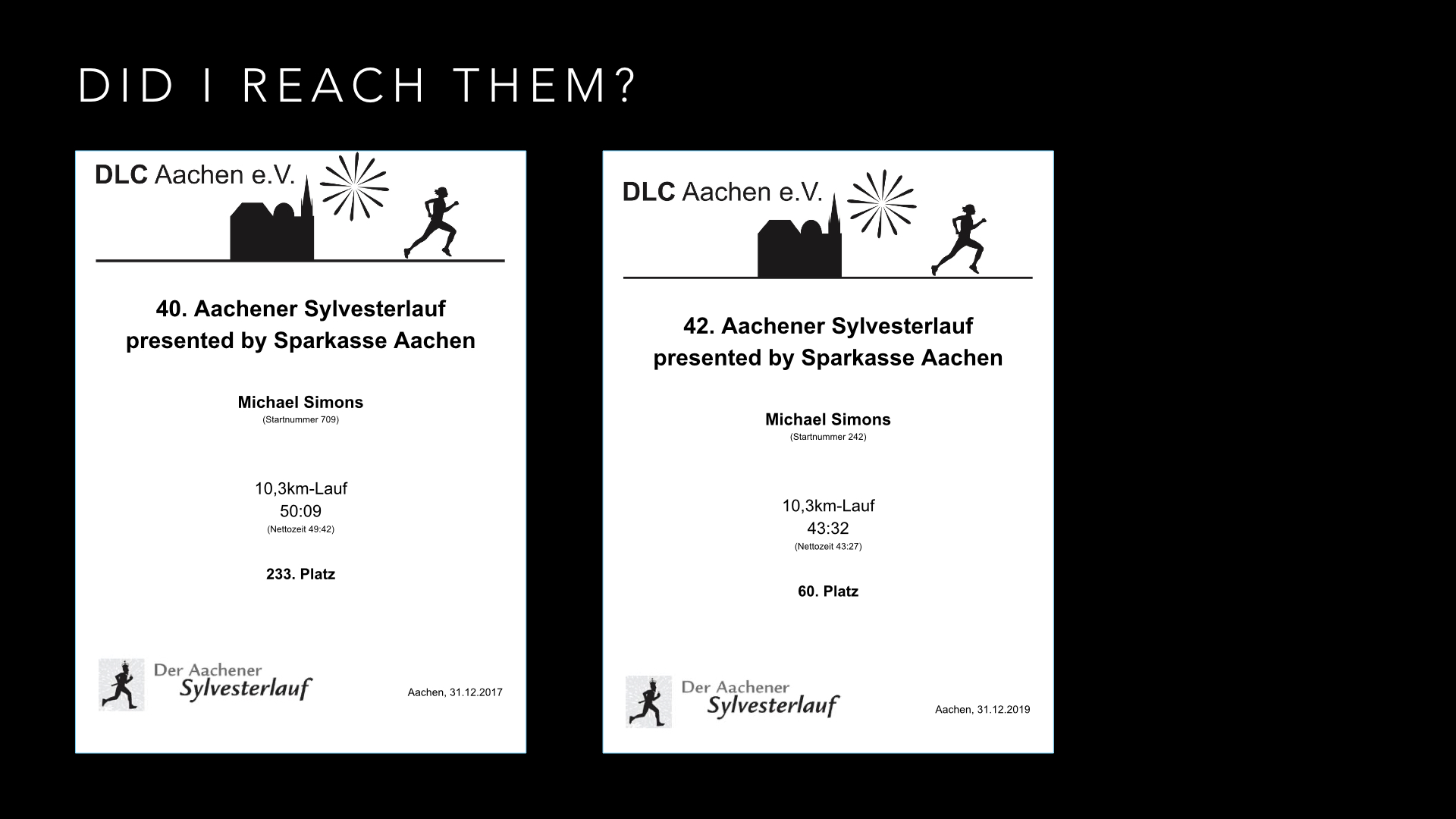 Where to find motivation? 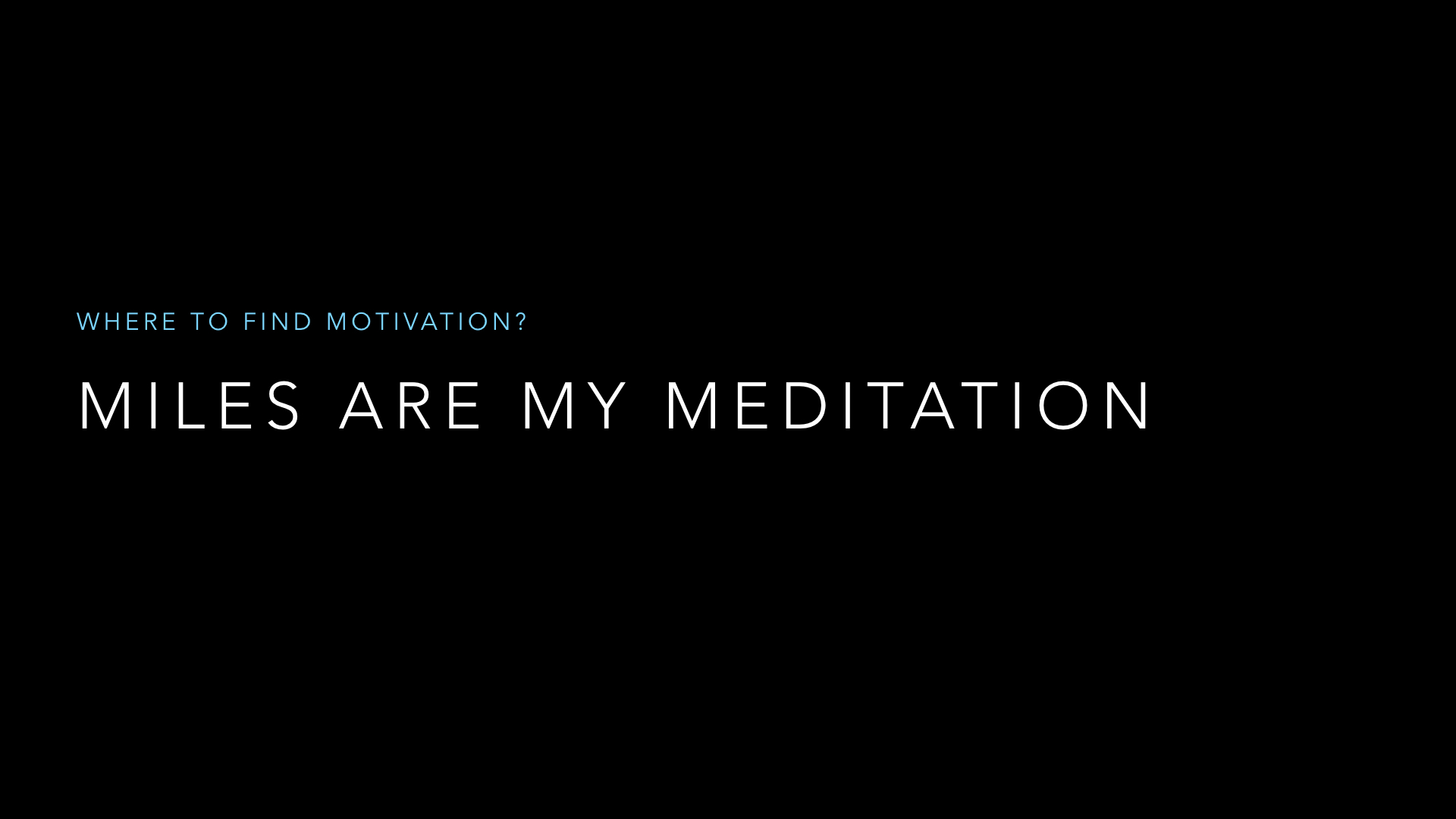 I already gave that answer: Miles are my meditation. Doing long distance things has a calming and relaxing effect. Runners or cyclist high is a thing.

It’s like turning off the repetitive thoughts in your head that circle around issues, anxiety and problems.

It forces you to focus on your breathing, your body, yourself. On the next step hill or mile in front of you. Not some abstract thing in the future. 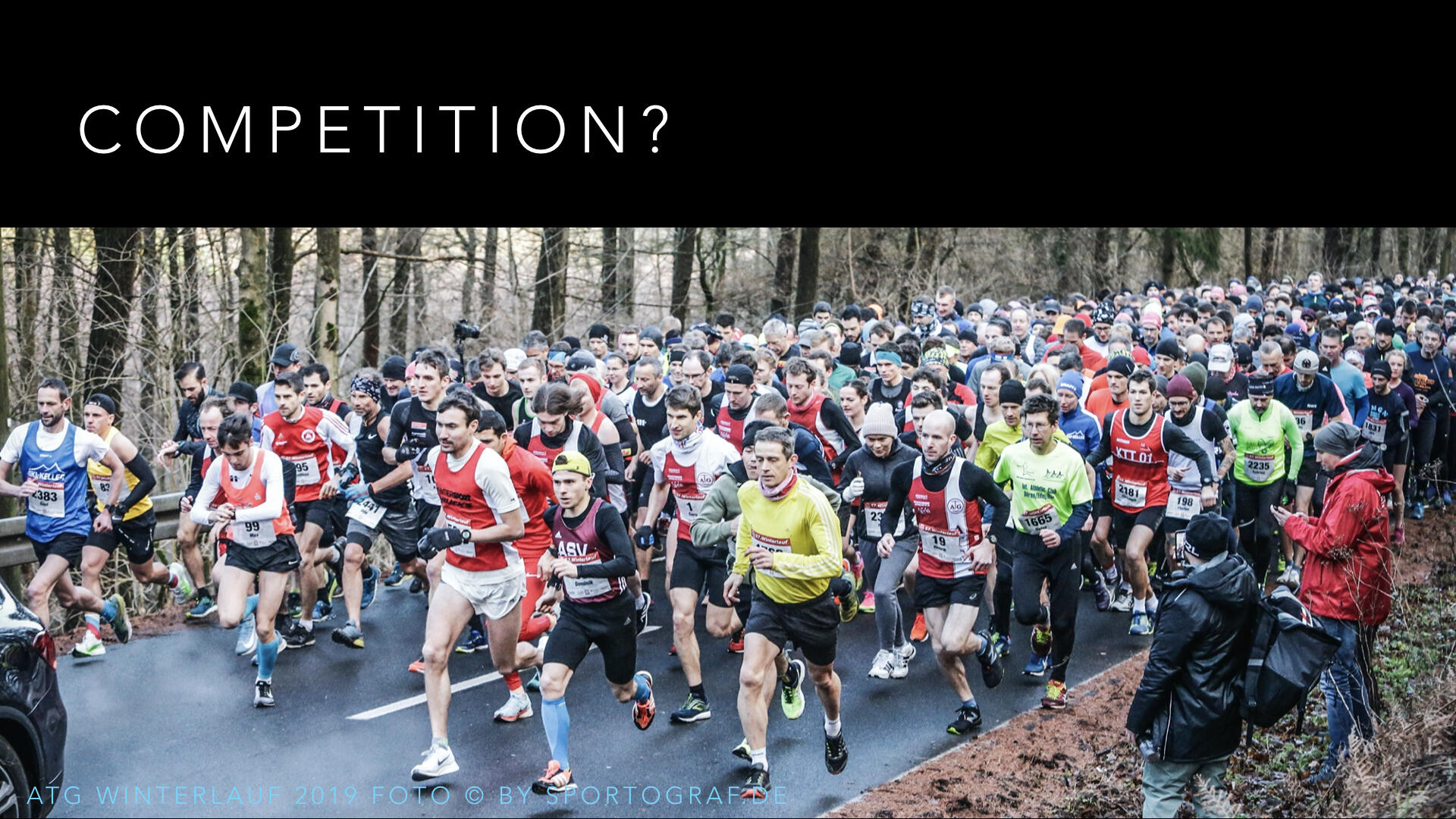 I like doing races because they make me stretch. It’s not like that I’m trying to reach a certain place, but running with a lot of folks and a timer ticking actually increases your pace by a whole magnitude.

Also: It’s great running in places that are reserved otherwise for cars etc.

Fun fact: I never considered participating in a cycling road race. I find group rides with more than 5 or 6 people mentally straining enough already. In a peloton you’re usually super close to each other and you really have to be aware. Kinda defeats the purpose of switching ones head of for a while. 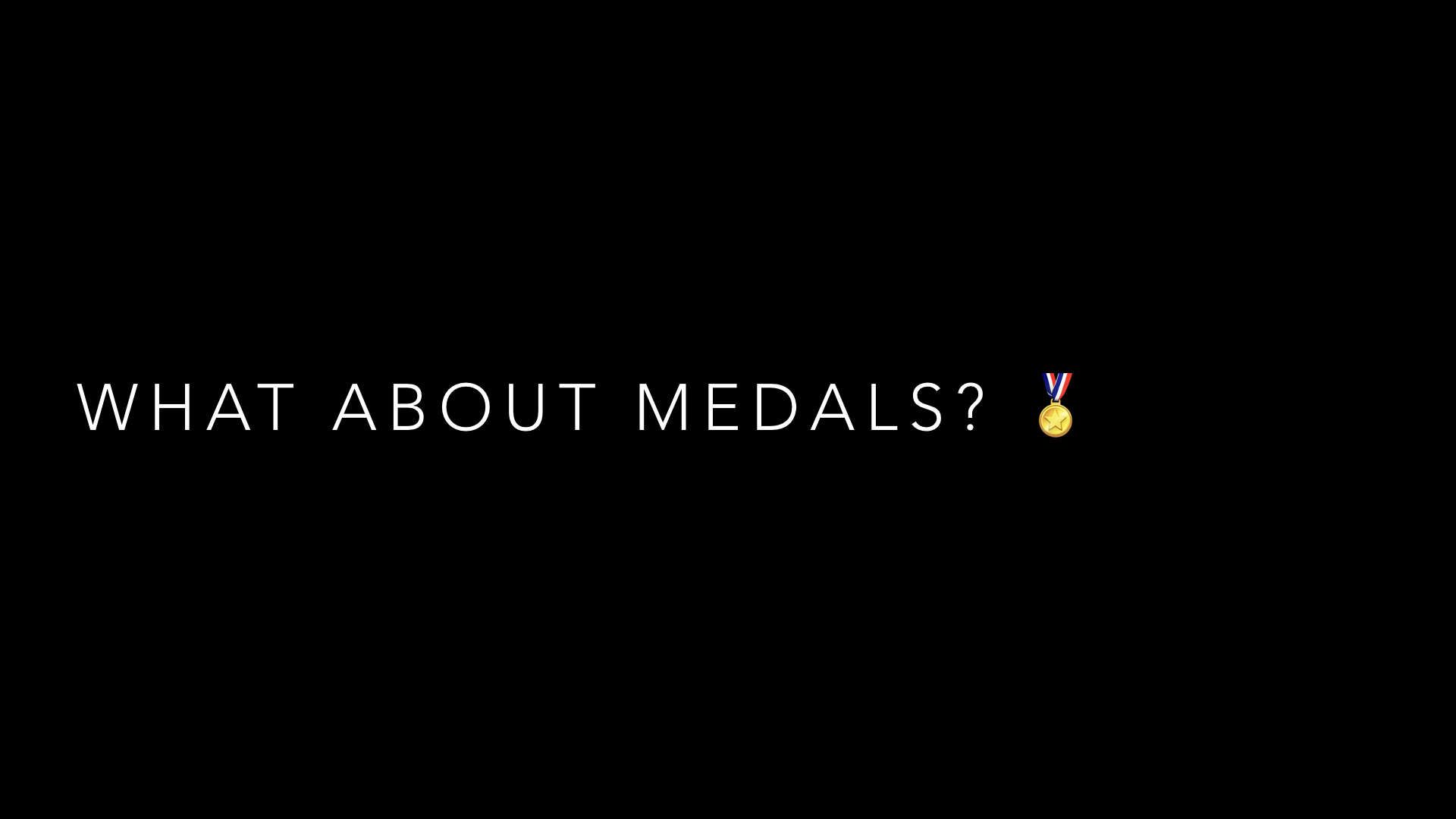 Remember what I said at the beginning about outside appreciation: Medals, physical and virtual, are also that, so enjoy them, but they don’t matter anyway (at least when you’re not a professional racer, I guess). 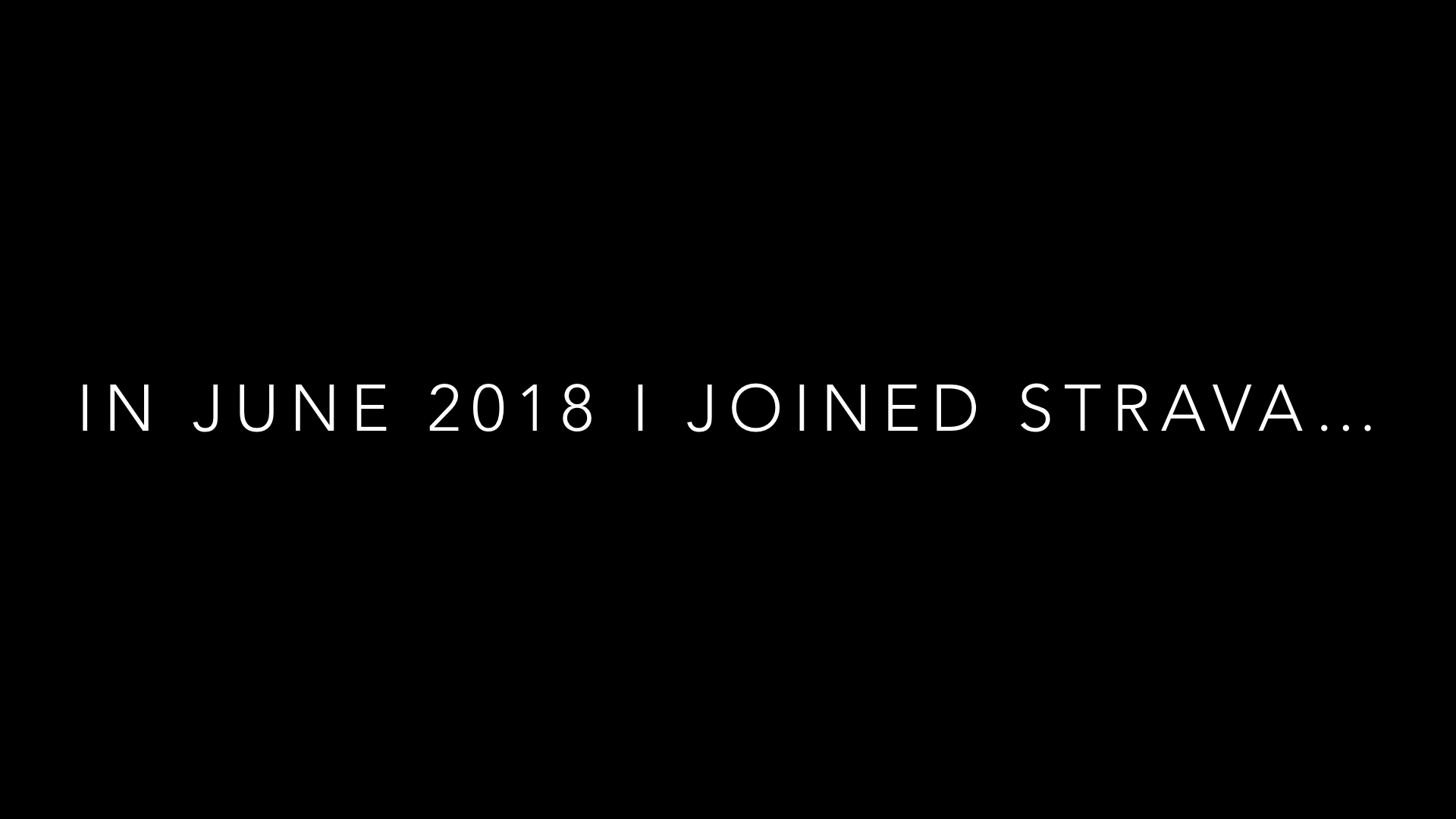 and things escalated a bit. I never thought that a platform like Strava would change my life that much.

If it’s not on Strava, it didn’t happen

In 2019, I went totally bonkers… Here again a goal: Doing a Strava “Gran Fondo” aka a 100k cycling tour each month and taking pictures. That was a fun thing to do… I even created a small book from it and donated the revenue. 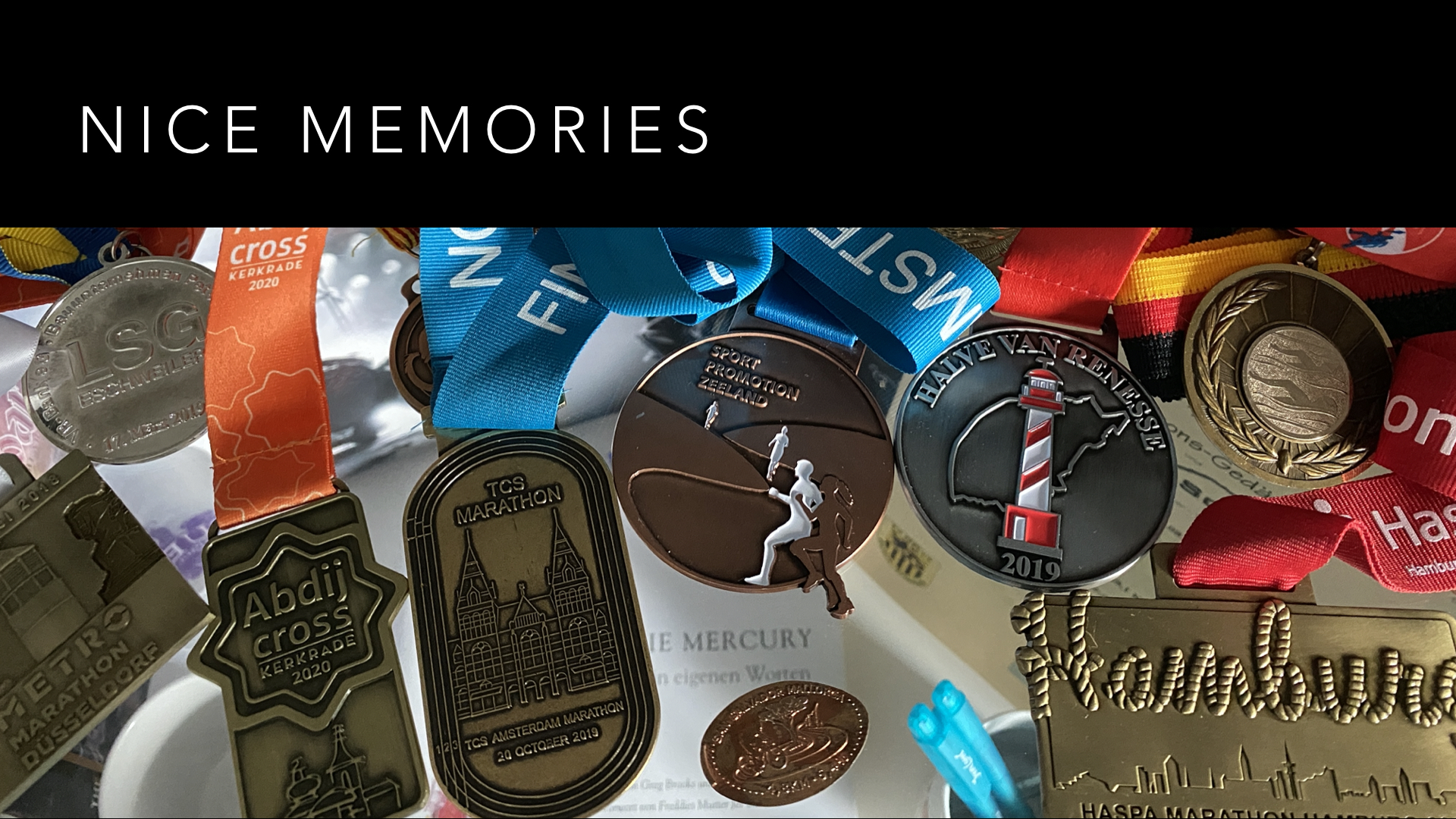 I have been thinking about these now for some time.

I have been discussing Strava and gamification with my wife and also the kids. The kids love this physical medals and yes, even when I said earlier today, don’t rely too much on outside appreciation, kids being proud of their parents is a hell of a good appreciation.

And actually, having some real tokens fits the experience of doing a halve or a full marathon a lot more. 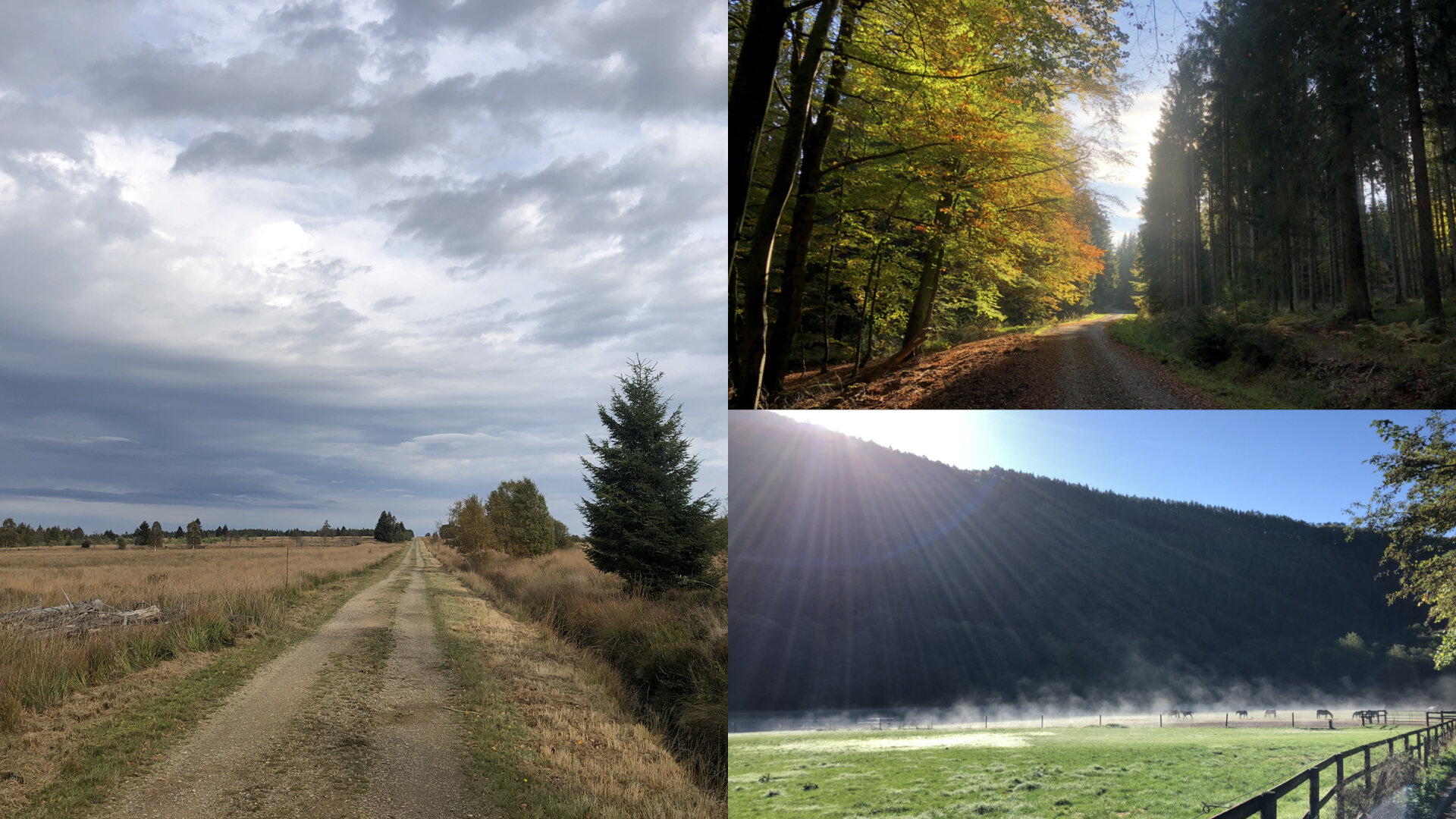 The biggest motivation for me however is being outside. Doesn’t matter if on bikes or running. While I took all three pictures here near my home during pretty good weather, I ran and cycle the last two years with

I found it much easier to go out running in bad conditions, the effort required to clean messed up gear is just smaller. Cycling usually means more inertia as you need to plastique wrap yourself and most of the time, wash the ride.

I used to listen to music the first couple of weeks while running but eventually stopped it. I don’t listen to podcasts. I try to don’t think about anything.

I cannot stress this enough: The brain also needs room to wonder and ruminate.

Zwift and generally indoor sports never clicked with me. They allow a lot of people to make the most of their time and I get this. Would I use something indoor sports, I would missing the bit of letting my brain go. Of course I would watch talks or TV shows.

How did the running influence me? 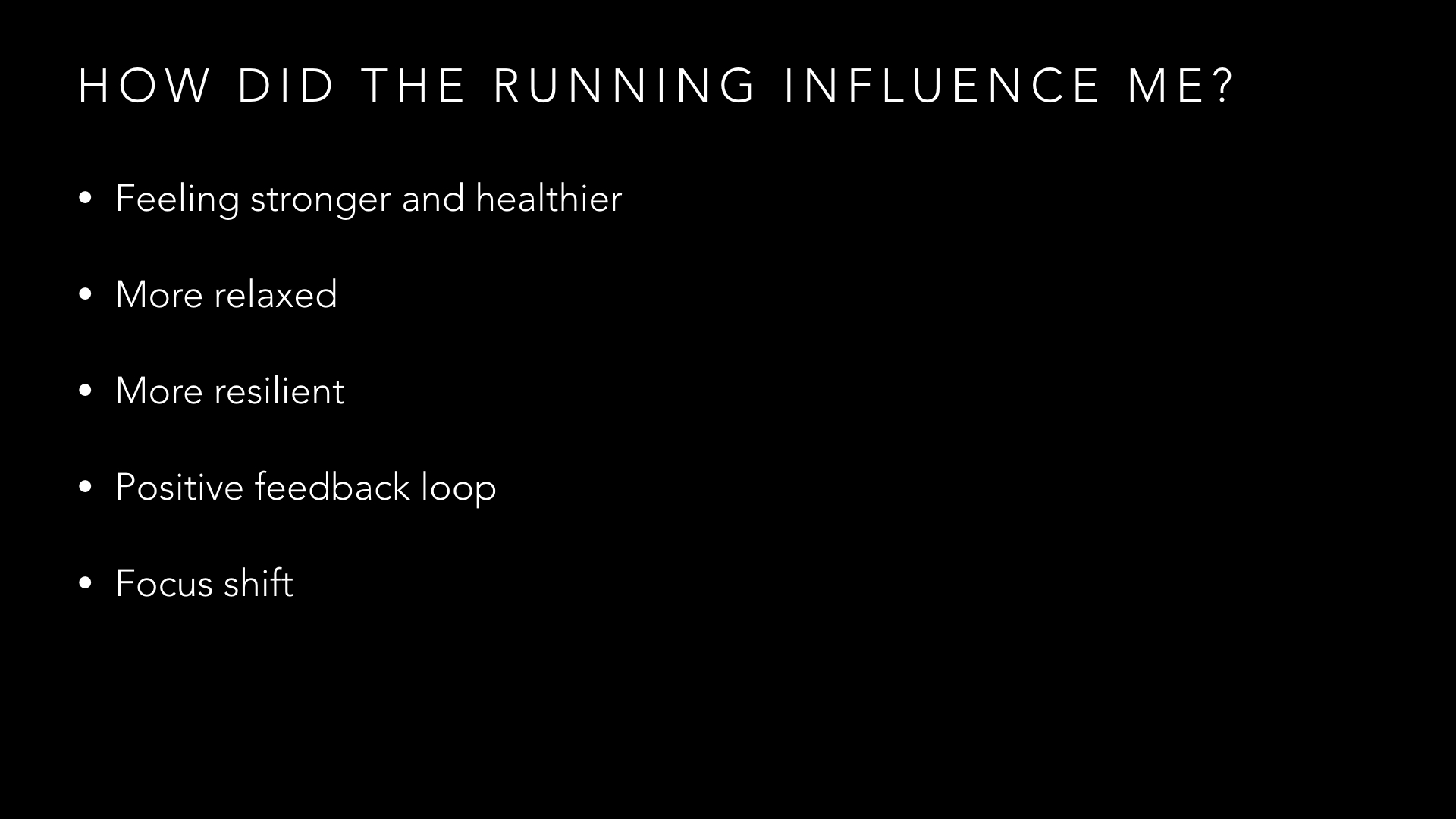 As plain as it is: I feel stronger and healthier.

Also, as simple as that: Working out, feeling yourself, your body and the surroundings and a hot shower afterwards does wonders, much more than the a lonesome leisure beer does.

For me, it worked wonders avoiding depersonalization.

It made me more resilient: I needed to overcome an initial pain point.

The longer distances taught me that pace control is important. I can rush all the things I want in the beginning, if I cannot reach my goal, it’s in vain.

Let me tell you this story: I ran my first marathon in April 2019, started with an achievable goal time and try to run a constant pace to reach that. The second one, in October the same year I was like “Go all in”. That worked well enough for the first half of the thing and ended with me more or less crawling behind the finish line. In the end, I was only a minute faster than on the first one but at the same time, wore myself down.

Anyway, it’s the same with work: Make sure you’re in a place where you can find your pace. A good place will you give the time for that.

The realization that I’m actually good at something I always disliked is eye opening.

If it works with sports, it probably works with other things, too. Things that might seem out of your comfort zone, too.

Like: Being more open in work, accepting help, accepting challenges that involves more than superficial reflections and so on.

Let’s focus on that one.

I had enough time to think while running and realized a couple of things:

So let’s raise the question: How did I let it come to this, even in surroundings where it would not be technically necessary. Why do we overwork?

Continue with part 3: Why do we overwork and burnout?

This entry (permalink) was posted on March 23, 2020 at 9:04 AM by Michael, tagged with Thoughts and categorized in English posts.